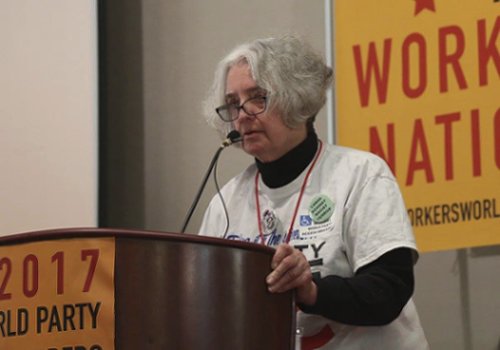 On the one hand, we work for a living, or want to. On the other hand, it is capitalism that grinds us down and we have to struggle against the tax “reform” proposal which would wipe out necessary benefits to give tax cuts for the rich.

We are not asking for charity. We pay taxes, raise families and fight for jobs. We are demanding our rights to housing, education, public transit and employment. But for decades we have been invisible. We were warehoused in institutions or taken care of by our families, hidden out of sight.

Our first goal is to be seen as people. We have to become visible to change public attitudes. The second is to eliminate artificial barriers, like stairs. The third is legal. We have to change laws like the “Fair” Labor Standards Act which allows employers to pay subminimum wages.

The disabled rights movement started during the Depression, prompted by the economic situation at the time and energized by the labor and civil rights struggles of the period.

Six workers formed the League of the Physically Handicapped in New York City to protest discrimination by the Works Progress Administration. The NYC Home Relief Bureau stamped applications from disabled applicants with “PH” which stood for “physically handicapped.” The six requested a meeting with the director of the Emergency Relief Bureau. After the director refused to meet with them, a nine-day sit-in began.

A weekend sit-in was held at the WPA headquarters in June 1935. These actions led to the creation of 1,500 jobs in New York City. Soon the league had several hundred members and a speakers’ bureau that educated unions and progressive organizations on disability issues.

There were at least two sit-downs of visually disabled workers in 1937, one in Pittsburgh and one in New York. This was remarkable, considering they were prohibited from forming unions and bargaining collectively at the “sheltered” workshops where they were exploited. Like many progressive groups at the time, the league was red-baited and eventually dissolved.

The exploitation is allowed by the “Fair” Labor Standards Act of 1938. This act legalized important long-fought-for rights like the eight-hour day, the 40-hour work week, time-and-a-half pay for overtime and an end to child labor. But it engraved in stone a subminimum wage for some 16 to 18 categories of workers, including prisoners, home care workers, agricultural workers, disabled people and sex workers.

This act is the “divide and conquer” ploy of the capitalists. By mandating a subminimum wage, it encodes the idea that these groups are not real workers. We are marginalized, discarded and made invisible. We are “precarious” workers. It has nothing to do with the quality of our work.

This law has been amended several times, but it has never been amended to eliminate the subminimum wage. There are currently two amendments proposed which would raise or eliminate the subminimum wage: one was drafted by the National Federation of the Blind (NFB), which has held demonstrations around the country. Another attempt was made by Sen. Bernie Sanders. However, to date, neither has succeeded.

Today, the national struggle is to raise the minimum wage from $7.50 an hour to $15 an hour. You sure can’t raise a family on a subminimum wage.

Goodwill Industries International pays wages substantially lower than the minimum wage to thousands of employees while its top executives receive $53.7 million in total compensation. Goodwill justifies this pay scale travesty by saying they are “training” workers.  The NFB disputes this claim. Furthermore, Goodwill admits it successfully runs 101 of its affiliates paying full minimum wage. However, rather than requiring its other 64 affiliates to pay higher wages, it says it’s a “local” decision and ignores the inequity. (nfb.org)

Workers World Party, to its credit, has always included disabled workers’ struggles in its program. Our party members picketed a Goodwill facility, vociferously demanding higher wages, during a lunch break from our 2014 national conference in Queens, N.Y.

In the 1960s and 1970s, warehousing in institutions began to end, and disabled people started moving into the community. The independent living movement was global in scope. Struggles erupted to gain access to housing, education and public transit.

Medicaid played a critical role in this change as it financed necessary services. A close bond developed between disabled people and their caregivers. Recently, activists in Kansas lobbied successfully for a pay raise for their support workers.

In New York City, comrade Betsy Gimbel was the secretary of a local group called Disabled in Action. The leadership was cautious, but the membership, including Betsy, wanted action.  At the time, buses were largely inaccessible for wheelchair users and there were no curb cuts. Betsy led the group to sit in at strategic locations around the city — bus terminals, the beginning and end of bus lines, Midtown and elsewhere — demanding accessible buses.  Eventually they were successful.

NYC officials were embarrassed by this activity, so they established the Mayor’s Office for People with Disabilities. Disabled in Action’s president was the first commissioner. Disabled people could call his direct phone number when a problem arose. Now, city officials brag about having 100 percent accessible buses, and sponsor the annual Disability Pride parade in July.

Similar demonstrations occurred in Denver, where the Atlantis Community, (later Americans with Disabilities for Accessible Public Transportation) sat in for three days and surrounded the buses in 1978. At night, they placed their placards under the windshield wipers of the buses, climbed down from their wheelchairs and slept on the ground. It took three years and several more demonstrations, but they finally won accessible buses.

During the Carter administration, a struggle began for comprehensive federal legislation to codify the rights of the disabled. Thirteen years later, in 1990, President George H.W. Bush signed The Americans with Disabilities Act (ADA). This act specified the rights of the disabled and contained specific criteria for removing architectural barriers, such as stairs and installing ramps.

Parades are held annually to commemorate the signing of the ADA. In New York City, they stopped after 9/11 because Mayor Rudy Giuliani refused to sign a parade permit. Disability Pride parades began again in 2015 and get larger every year.

Comrade Edward Yudelovich and I wanted to bring a political note to this year’s parade, so we asked the Peoples Power Assembly to make signs and bring our banner. The slogans were “Subways Should Be 100% Accessible,” “Hands Off the ADA” and “Defend the ADA,” as some members of Congress are pushing legislation to weaken it. Comrade Brian Shea worked to build the parade in Boston.

The movement for independent living is global in scope. Shea attended a conference in 1996 in Cuba on this subject, which is covered in Workers World’s pamphlet entitled, “Disability Rights and the Class Struggle.” Some 300 Cuban and international delegates, the overwhelming majority with physical disabilities, attended the conference. Shea reported that delegates came from Latin America, the Caribbean, the United States, Spain and the former Soviet Union.

At the conference, Shea learned that the Cubans had become expert in treating the ulcers that result from sitting in a wheelchair all day, and that the U.S. blockade has prevented them from acquiring proper cushions for the chairs which would alleviate the pressure sores.

At the National Council on Independent Living conference held in Washington, D.C., this year, almost one-third of the delegates were from Japan.

Enter Trump. Trump’s first goal after the election was dismantling the Affordable Care Act, especially Medicaid, which is literally a life-and-death issue. This brought the struggle to a new pitch. Disabled people were fighting for their lives.

Members of ADAPT (renamed Americans Disabled Attendant Programs Today), now a national organization with chapters in many cities, sat in at Senate Majority leader Mitch McConnell’s office for several days, protesting a bill which would severely undermine the ADA. Wheelchair users were callously arrested, picked up and thrown into police vans. The protest was so dramatic and the issue so pivotal that it was aired on all the television stations.

A few weeks later, the fight erupted again in the Senate chamber. Members of ADAPT and NCIL, which have overlapping memberships, marched through the Senate chamber shouting “Kill the bill! Don’t kill us!” The anti-health care bill was voted down for the time being. But the rich right wing never gives up.

We, the disabled, are currently working with the PPA on a campaign to improve the Metropolitan Transportation Agency. It is a terrific target. It is a microcosm of the capitalist system. Every working-class New Yorker rides the subways and buses, and everyone hates it.

According to the city comptroller, each household pays $130 a month in taxes, which is earmarked for the MTA. Also, we pay $108 a month for MetroCards. Do the math; that’s $238 a month per rider. And there are over 8 million riders a day during the workweek.

We want to cancel the debt. We want elevators so subways are accessible. We want more buses because the MTA has reduced the number of buses on each route, and they are so crowded you can’t get on them. So you wait for the next one. The next one passes you, marked “Not in Service” and you wait longer.

The MTA officials are refurbishing stations and building new ones in gentrified neighborhoods, and not in others. We want to end racist policing in the subways, where cops arrest youth of color for jumping the turnstiles.

Recently, cops arrested a station agent, Darryl Goodwin, a Transport Workers Union Local 100 member, for not moving quickly enough when police asked him to buzz them in. He was suspended without pay. When reinstated, he worked a lot of overtime to make up the lost pay. He was worried about his upcoming trial and pending charges. He died of a heart attack shortly after going to court. We want justice for him. We clearly have work to do.

Kaessinger is a wheelchair user.