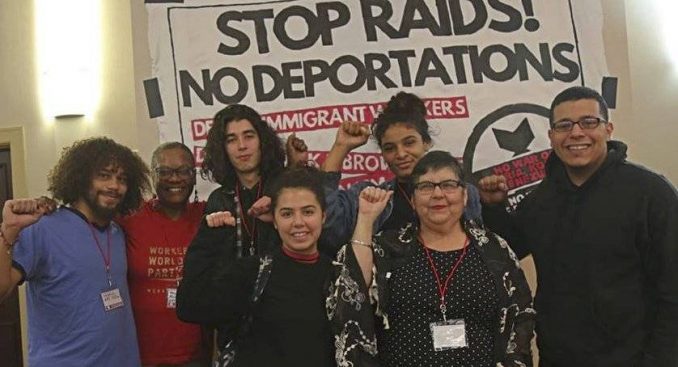 At the Workers World Party conference, 2017.

Social consciousness often lags behind reality. Things change, but our understanding of them is hampered by old conceptions, born out of previous conditions.

And then, when the gap becomes utterly preposterous, there can be great leaps forward as consciousness overtakes reality in what seems like a dizzying whoosh.

Marxists have long understood that societies progress not evenly or in a straight line, but by what some call “combined and uneven development.” Lenin wrote about the extremely rapid capitalist development of Germany and Japan in the era of imperialism, when they caught up to and even surpassed some of the more established European colonial powers in a few decades.

What is true of material development is also true of consciousness. It progresses not slowly and evenly, but by leaps forward — and sometimes backwards — as conditions change.

Are we seeing the beginnings of a broad and deep change in consciousness inside the U.S.? There are many reasons to think so.

First, of course, is the emergence into prominence of popular movements that have long been suppressed. The ongoing struggles of Black and Brown people against racism and national oppression, of women against the patriarchy, of LGBTQ people against queer bashing, all continue, for these conditions are reinforced by both the state and the way capitalism functions. Yet the consciousness of tens of millions has been changed by these struggles, to the point where capitalist liberalism has to make itself appear to be on the side of justice.

Alongside this are the many polls in recent years showing that capitalism has become a dirty word. Why else would a demagogic but calculating billionaire politician like Trump talk so much about workers? He is trying to refurbish the image of capitalism by linking it to “good jobs,” blaming other countries for “stealing our jobs.”

At a time in history when automation, robots, self-driving trucks and a zillion other labor-saving innovations are dazzling the owners of capital with the promise of shedding workers so they can rake in even bigger profits, Trump’s tweets are bound to wear thin.

Right now, young workers are on the cutting edge of consciousness. We saw some of them on Nov. 18-19 in Newark, N.J., at the Workers World Party national conference. Proudly multigendered and multinational, they did a splendid job of defending and explaining the need for revolutionary change in this country. And they weren’t afraid of making it known to the whole world — via social media. What a change from the days when progressives feared being hounded and isolated!

This struggle is only beginning. But already the outlines of an immeasurably better future are clear. We humans have progressed in our knowledge to the point where we have the means to end backbreaking labor so everyone can have what they need without being worked to death. An increasingly smaller class of increasingly richer individuals stand in our way.

Wrap your head around that, and revolutionary consciousness is sure to follow.