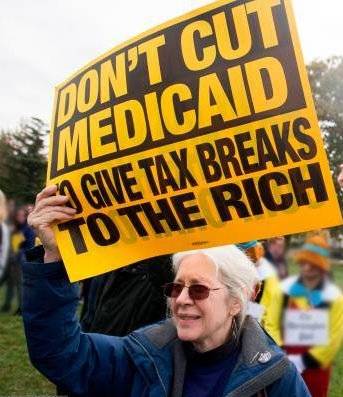 Contrary to the lie that the Republicans are proposing populist relief for all taxpayers, an honest analysis of the proposed tax legislation reveals that the super-rich would get the greatest benefits and many U.S. workers would see their taxes increase over the long term.

On top of this, since reduced taxes would increase budget deficits, there is little doubt that all poor people and workers, who are the creators of all wealth, would lose through cutbacks and austerity measures.

Taxes fund the state: For whose benefit?

The money collected in taxes, mostly from workers’ paychecks, funds the state apparatus.

When Marxists speak of the state it is not in reference to the state of New York, Ohio or California. They mean the repressive arms of the government — army, police, jails — that protect the property and interests of the rich and repress the working class. It’s the state that stops poor people in rebellion from emptying a supermarket to feed their families.

“The state, simply, as the repressive apparatus of the government — the courts, the prisons, the police, and the military — stands to maintain the social relations as they are, to protect the owning and possessing few from the exploited and oppressed masses,” as explained in the pamphlet “What Is Marxism All About.” (tinyurl.com/yd56da7h)

Most workers would go along with pooling our money to pay for subsidized housing, education, health care, good food, transportation, care for children, the elderly and disabled, and meeting human needs.

But in the capitalist U.S. most of the money taxed from workers’ pay goes to expand U.S. corporate interests through war and the military-industrial complex. Trump’s $1.1 trillion budget outline for 2018 proposes a $54 billion increase in military spending.

This 10 percent boost for the military is paid for by deep cuts to nonmilitary spending at the State Department, Department of Housing and Urban Development, Environmental Protection Agency and dozens of federal programs that either protect consumers or provide benefits to low-income people.

While this outrageous giveaway to the rich may be stopped or modified in the following weeks, it is becoming clear that only by building a mass people’s movement to fight the cutbacks and demanding the rewards of their own labor can workers begin to create an economic system that puts people over profit.