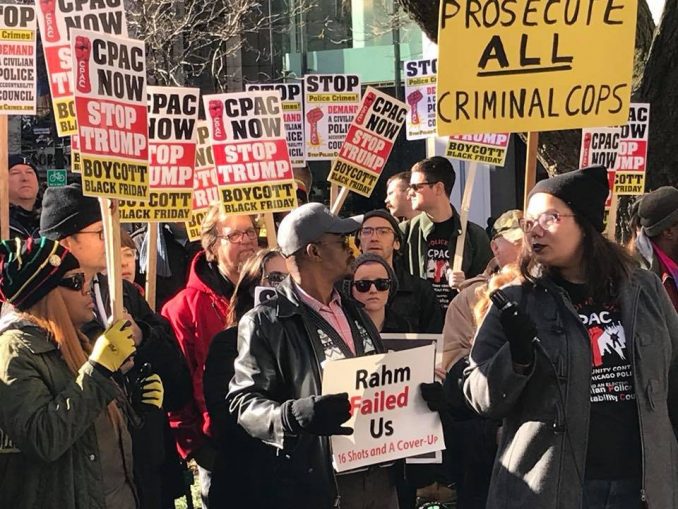 Chicago, Nov. 24 — Over 200 people rallied and marched here in a Boycott Black Friday action to demand enactment of an ordinance to ensure community control of police. The demonstrators marched down Michigan Avenue, Chicago’s toniest shopping district, picketing luxury malls and retailers along the way.

Chants and signs focused on the failure of the injustice system to try and convict racist killer cops. One of these is Jason Van Dyke, who has yet to go to trial after pumping 16 shots into unarmed 17-year-old Laquan McDonald over three years ago in what can only be deemed an execution on the streets.

The demonstrators also highlighted the longstanding practice of police torture by Chicago cops. From 1972 to 1991, hundreds of arrestees were tortured under the direction of Chicago Police Department Commander and Detective John Burge.

Most of those tortured and then convicted on the basis of false, coerced confessions remain behind bars today. The release and exoneration of these hundreds of wrongfully convicted people are a key demand of Chicago’s growing abolitionist movement.

Protest participants also expressed outrage at the recently approved $95 million police training academy — in a city where schools are deteriorating and youth community centers are few.

Speaking at the march was Dorothy Holmes, whose son Ronald Johnson was shot down by police just one week after Laquan McDonald’s murder, despite being unarmed and running away from police. Other speakers included Frank Chapman of the Chicago Alliance Against Racist and Political Repression, the primary organizer of the action; and representatives from Black Lives Matter, United States Palestinian Community Network, Anakbayan, Freedom Road Socialist Organization, Workers World Party and other organizations.