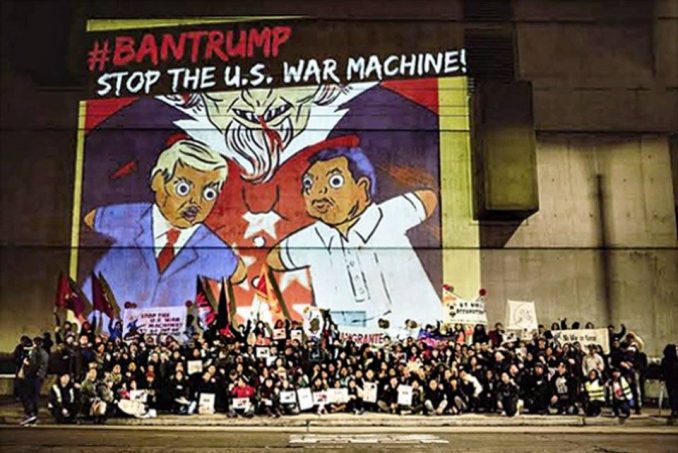 The following report is based on a press release from BAYAN-USA.

The protest was organized under the banners #BanTrump and #ResistUSWar by BAYAN-USA, an alliance of Filipino organizations across the U.S. The BAYAN protest was joined by a coalition from Korean, Vietnamese and Pacific Islander communities. Workers World Party Bay Area branch was a sponsoring organization.

The San Francisco rally was part of #BanTrump actions scheduled Nov. 12-14 in Chicago, Los Angeles and New York. These coincided with demonstrations in the Philippines as Trump arrived in Manila for the East Asia Summit of the Association of Southeast Asian Nations. Earlier, Trump was met with massive protests in Hawaii, Japan and south Korea.

“Trump’s ­agenda uses the ­Philip­pines as a military launching pad against his economic rival ­China, draining the Philippines’ ­natural resources and exploit­ing its ­people for cheap labor,” said BAYAN-USA spokesperson Jessica Antonio in a press statement. “The never-ending War on Terror continues to be an excuse to increase U.S. military spending, now proposed to reach $700 billion. Meanwhile, budgets are cut for much-needed social services here in the U.S.”

Io Sunwoo of HOBAK (Hella Organized Bay Area Koreans) was also quoted in the statement: “Trump is nothing more than an arms dealer, a war profiteer. Our fight is for all of us under the stars, and as long as we have love for our people and a deep belief in our future, we will never give up our struggle for peace and self-determination.”

Leslie Tran of VietUnited, a progressive Bay Area organization, was also quoted: “As the 1.5 and 2nd offspring generation of Vietnamese refugees and immigrant parents fleeing war, we live as proof that the U.S. war machine is a dark evil with violent impacts lasting for generations. Under the Trump administration, communities of color are targeted more shamelessly than ever before. In this moment, we come together to condemn the massive violence this country has placed on our ancestors, our people living in the U.S., and our communities abroad.”

For more details on future actions, go to bayanusa.org.