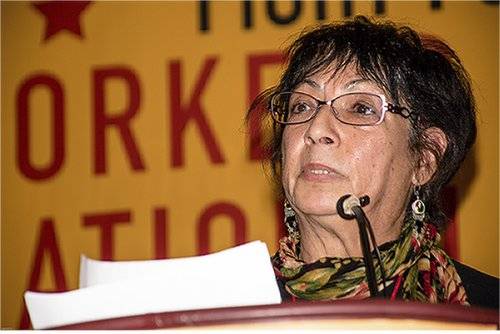 Comrades and friends, thanks to the Bolshevik Revolution, we know that a life with dignity is possible under socialism. That it is not a dream or utopia. To live in a place that is affordable and in good condition. To not have to worry because you need to see a doctor but you have no insurance. That you or your children can study without having the burden of tens of thousands of dollars in debt. That the industries can be controlled by the workers for the benefit of the community, and not for Wall Street. And that all the services and utilities needed are run, not to make profits for a few, but to enhance the quality of life of all.

If there is a place now where there’s an urgent need to look beyond the bleak existing conditions and extend the vision to a horizon of socialism, it is in my country, Puerto Rico. The cruelty of the most despicable imperialist domination is being exercised now in this colony of the United States.

What is happening? Last year, the U.S. Congress passed a law called Promesa to impose a fiscal control board that would make Puerto Rico pay an illegitimate public debt of $74 billion. A debt that U.S. banks created in the first place! This board started imposing a neoliberal austerity program, cutting pensions, closing schools, cutting drastically the budget of the 78 municipalities of the Puerto Rican archipelago. We must point out that the municipalities are the ones responsible for the day-to-day operations of the cities, so, without enough money, they are obligated to cut essential services.

Today, at 58 days — two months — after María, the situation is not much different. In spite of a virtual U.S. military occupation — the U.S. sent troops, supposedly to help in reconstruction — people, principally in the mountains, have not seen them; in spite of the infamous Federal Emergency Management Agency, in spite of the millions of dollars wasted in contractors and consultants of all types, the people of Puerto Rico are still suffering, are still dying. The majority of the people have no electricity, and that means no hot meals, no ventilation in 90-degree weather, no lifesaving machines. Small hospitals had to close.

But if the hurricane was a catastrophe, nothing equals the catastrophe of the so-called reconstruction. It should be called instead “real destruction.” María has served Puerto Rico on a silver platter to U.S. capital. Capitalism in this decadent stage was already trying for several years to dismantle and restructure Puerto Rico in order to suit its current needs. María has given imperialism a golden opportunity.

The privatization of public services — particularly electricity and education — is being pushed very rapidly. They are moving their agenda quickly to take advantage of the lack of consistent communication. Since there is very little communication and people are unable to keep up with the news and developments through television or radio, the progressive movement cannot respond as the circumstances require.

It is still difficult to make a cellphone call, for example. When the telephone company was privatized in the late 1990s, the system grids installed were very inferior and weaker than those of the previous national telephone company. They definitely were not built with a storm-prone island in mind.

The corruption inherent to capitalism is being exposed. The flurry of multimillion-dollar contracts being authorized is obscene. One example is the Whitefish contract. Puerto Rico is bankrupt, but the Ricky Roselló government signed a contract to repair the whole electric system throughout the island with a two-year-old, unknown company from Montana that had only two employees — for $300 million. The interesting part is that the Whitefish chief executive officer, Andy Techmanski, is a friend of Interior Secretary Ryan Zinke in the Trump administration. Zinke is also from Whitefish, Montana!

Then, since there was a great deal of criticism — mostly from the U.S. and international media — portraying Puerto Rico as a laughing stock — the governor decided to cancel the deal.

At the same time, it was reported that the American Public Power Association, based in Washington, publicized that the Puerto Rican government had not asked for the activation of the mutual aid arrangement that would have helped the system recover more quickly and inexpensively. This is an association of all the public electric companies in the U.S.

The real purpose behind this failure is to make the people accept privatization of the electric service. Tired of not having electricity for the most basic needs, many people are already saying that they do not care who provides the service, they just want it re-established.

To make the situation more dire, the U.S. government has also prevented Puerto Rico from getting help from other countries. For example, the U.S. has refused aid offered by Cuba, Venezuela and Mexico. The Sindicato Mexicano de Electricistas, the union of electrical workers in Mexico, had offered a brigade of skilled workers. Cuba offered a mobile hospital staffed with 35 doctors and another brigade of electrical workers. Venezuela offered a ship loaded with much needed diesel fuel for generators. But the colonial ruler rejected all these offers.

The other sector targeted for privatization is the education system. It is no coincidence that the current governor contracted a Philadelphian, Julia Keleher — not a Puerto Rican — for secretary of education. She is a promoter of charter schools and now is carrying out an aggressive plan preventing the opening of schools in the island. As a consequence, thousands of families are leaving Puerto Rico to get to the U.S. just to have the possibility of enrolling their children in school.

Her justification for not opening the schools is that they are not in operable condition after María. But parents, teachers and even the students have targeted school after school for debris cleanup, painting and general reconditioning. They want their schools open and are working firmly for that end.

The movement to open schools now in Puerto Rico is a wonderful development, full of promise. It is a community-based effort where parents and teachers hold assemblies to plan the course of action. In a way, it could be an embryo of a Soviet formation. They are happening all over the island. And they are being organized independently, since there is still lack of communication. The glue that holds them together is their will to keep education free, to have their schools opened.

They are defying the secretary’s orders. They hold press conferences. They hold daily picket lines in front of their schools. They organize fundraisers. The rest of the community in many places is involved. The Puerto Rican Teachers Federation along several other organizations just filed a suit against the secretary and already many schools scheduled for closure have been opened due to the pressure of these actions.

One last aspect I wanted to touch on is the so-called hurricane aid.

There are many calls for aid and assistance to the victims of the hurricane. Of course it is all needed. The necessities are enormous. But one thing must be made very clear: The U.S. government has an obligation to the Puerto Rican people.

The call is not for aid or charity. They owe the Puerto Rican people for all the crimes committed: for the invasion in 1898; for the repression and persecution of independentistas; for the destruction of our agriculture; for the forced sterilization of women; for the contamination of Vieques and Culebra by the U.S. Navy; for the contamination of soil, water and air by pharmaceutical and petrochemical plants; for the imposition of a Jones Act that makes shipping the most expensive in the world; for the forced migration that is leaving the island depopulated; for so many other crimes; and above all, for the crime of denying the people of Puerto Rico the right of sovereignty and independence.

Puerto Rico is suffering, the nation is being torn apart, families are dismembered. But what Puerto Rico needs now is not charity, it is justice and solidarity!

Open the borders to international solidarity!

Repeal the Jones and Promesa laws!

U.S. military and FEMA out of Puerto Rico!