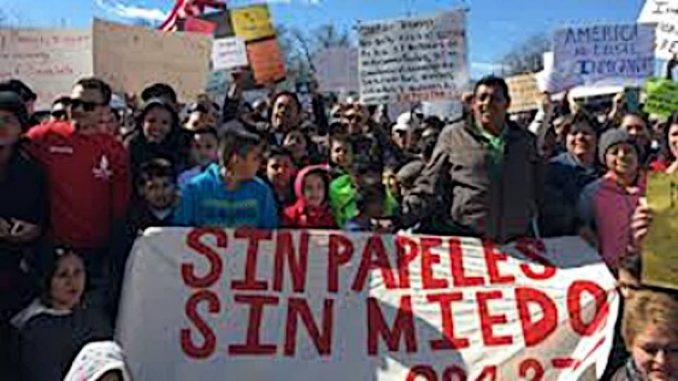 In its usual cruel fashion, the Trump administration made it obvious in the first week of November that it intends to end the Temporary Protective Status program.

TPS allows refugees from countries where there have been natural disasters like hurricanes or earthquakes, or political violence like a civil war, to live and work legally in the United States. It is granted by the secretary of Homeland Security on advice from the secretary of State.

Most of those who have been recipients of TPS come from El Salvador (195,000), Honduras (57,000) or Haiti (50,000). (Journal on Migration and Human Security, July 2017) Close to 90 percent are now workers in metropolitan areas on the East and West Coasts. They are estimated to have nearly 275,000 children, who were born here and are U.S. citizens. About a third are buying a house. The average length of time they have been living in the U.S. is 19 years. (Center for American Progress, Oct. 10)

The Trump administration proclaims very loudly that it was elected to end TPS. These bigots single out the people of color in the TPS program, proclaiming they are the reason wages are low and jobs are scarce — instead of admitting that this is how a capitalist economy works when it can get away with exploiting workers to the utmost because of their precarious status.

A number of economists say that the presence of workers protected by TPS actually benefits the economies of the areas where they are concentrated. In addition, the money they send to family back home amounts to 15 percent of the gross national product of the three countries that account for the majority of TPS recipients. (Pew Research Center, 2015)

But in the Trump scheme of things, inflaming white supremacy and inciting racism are worth even minor economic damage.

When Elaine Duke, the acting secretary of Homeland Security, decided she didn’t have enough information about Honduras and so extended TPS for Hondurans another six months, John Kelly, the retired general who is Trump’s chief of staff, called her long-distance from Asia to tell her to reconsider. She refused and said she will retire when a permanent secretary is confirmed.

The TPS decision for Haitians will come in late January and for Salvadorans in early March.

A number of Haitians who had moved to Brazil for jobs connected to the Olympics and the World Cup games tried to get into the U.S. on TPS. They wound up going to Canada when they couldn’t enter the U.S. There are significant Haitian communities in Montreal and Quebec City.

Through August a large number of Haitians crossed from the U.S. into Canada and applied for asylum. Had they attempted a legal crossing, Canada would be required to send them back under existing treaties with Washington. But an “illegal” crossing lets them apply for asylum.

The Canadian government is preparing for a major influx of refugees from the U.S., especially if TPS protection is withdrawn from 195,000 Salvadorans in March. The Canadian system for hearing asylum requests is seriously backlogged, but people with a pending asylum claim can get work before their case is heard. (Globe and Mail, Nov. 7)