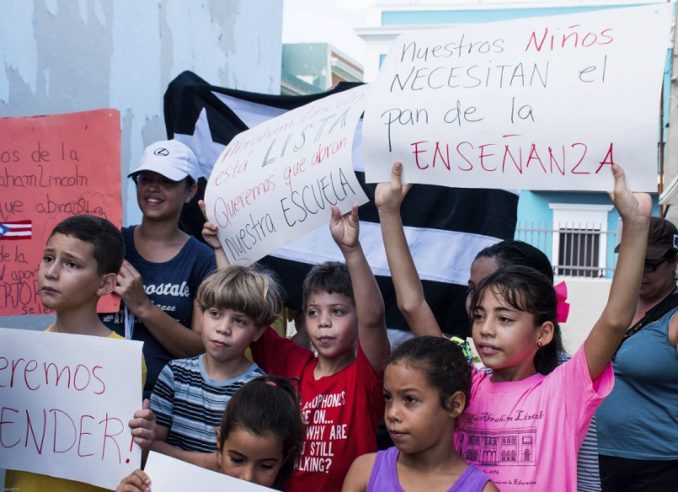 Puerto Rican kids demand the reopening of their schools.

San Juan, Puerto Rico, Nov. 13 — Never before in the history of Puerto Rico has the barbarism of colonialism been as exposed as it is now after Hurricane Maria.

When President Barack Obama signed the PROMESA Law that the U.S. Congress drafted in June 2016 to charge the Puerto Rican people an illegitimate debt of $74 billion, he never could have imagined that the conditions of the archipelago would end in the enormous chaos in which Puerto Rico now finds herself, as conditions in the country are ripe for the implementation of criminal neoliberal actions. It’s as if the colony has been served on a silver platter to the empire, to be conveniently disposed of without further ado.

What are these conditions?

Puerto Rico is a country almost totally paralyzed. In a macro vision and in economic terms, it can be said that production is almost zero. Without electricity and depending on costly diesel-based generators, very few of its manufacturing industries — above all pharmaceuticals and those making specialized electronic components — have recovered some normalcy.

Underscoring the reality of the colonial state is the fact that these are large foreign companies that send their profits to the owners outside of Puerto Rico. As good capitalists, they have no interest in the welfare of the people. The persistent fear of the servile Puerto Rican rulers, however, is that these corporations will leave the island, taking with them the country’s artificial manufacturing base.

This fear is further aggravated by a recent U.S. congressional proposal to impose a 20 percent tax on merchandise produced by U.S. companies based in Puerto Rico. If approved, it will be a one-way ticket for these manufacturers.

The vast majority of small Puerto Rican businesses have had to close temporarily, if not permanently, as they are unable to afford the enormous economic burden of generating their own electricity. The owner of a small ice factory — a commodity in high demand now — recently reported on a radio program that the company would soon have to go bankrupt because he cannot afford to continue paying $1,000 a day for diesel fuel.

This writer recently visited Puerto Rico as part of a solidarity brigade sent by Mundo Obrero/Workers World Party, along with comrades Cornelious Moody, Mike Wilson and Joe Piette. One afternoon we went for a walk through Old San Juan, a representative historic site on the island, with numerous business establishments, restaurants, café-theaters and shops.

Normally this area is full of both Boricuas — Puerto Ricans — and tourists. Now, on street after street there was a succession of padlocked doors. Some small shops were open in darkness; others had light, but it comes from bad smelling, noisy and polluting electric generators, as their owners try hard to survive this catastrophe. As I walked by, it was hard not to think about the lyrics of Rafael Hernández’s song, “Lamento Borincano,” about what will become of Borinquen.

There is now what could be called an “emergency economy.” A wave of contractors — real vultures — hovering above the island in search of coveted Federal Emergency Management Agency dollars. Luxury hotels, whose owners are mostly from the United States, rake in super-profits housing FEMA personnel, troops and contractors. Obscene corruption spreads to all levels of government, in both Puerto Rico and the U.S.

The government of Gov. “Ricky” Roselló signs contracts left and right behind the people’s backs, taking advantage of the lack of communication due to the lack of cell phones and electricity, and with the people unable to follow the news on television or radio. He is supported by a series of executive orders, which can easily grant him the title of “dictator.” It’s ironic that “transparency” was the slogan in his race for governor.

In one of these contracts, blame is being thrown from one side to the other, between the Puerto Rican government and FEMA. It involves the much talked about Whitefish company. An unknown firm from Montana created just two years ago with only two employees, Whitefish made a $300 million bid to restore the island’s immense electricity network — and got the job! It’s revealing that Ryan Zinke, Trump’s interior secretary, is from Montana, grew up in Whitefish, and although he denies his role in granting the contract, there is strong suspicion that he influenced the deal.

After enormous criticism at both the local and the international level, in which the government of Puerto Rico was depicted as the laughingstock of the world, Roselló ordered the contract canceled. Now an investigation is in the hands of the FBI and the U.S. Congress.

But Whitefish is not the only predatory contract. Another, for $200 million, was signed with Cobra Energy, a subsidiary of Mammoth Energy Services, based in Oklahoma.

Meanwhile, more than 50 days after Maria struck, more than 70 percent of the country is still without electricity.

Harder hit in the mountains

Traveling to the mountains in the center of the island, where the people suffered much more than in the low areas, we saw completely shattered houses and whole families, plus neighbors, living however they could in the only room where María had spared the roof. We saw how they drink contaminated water, witnessed their hunger and how dangerous the paths are they walk on; the flood carried away part of their lives.

We then went to the municipality of Ceiba. This is a vast region where the U.S. Navy once had its largest base, Roosevelt Roads. The base closed in 2004 after the Puerto Rican people struggled to drive the U.S. Navy off of Vieques island, which was part of that naval complex.

In Ceiba we saw huge white tents with air conditioning, similar to those that are rented for graduations and other mass events. They were the FEMA barracks in the region, with military personnel everywhere. They were surely for low-ranking soldiers, not the ones who stay in the luxury hotels. However, they enjoyed a roof and electricity, which no longer exist in hundreds of homes in the mountains, which are still waiting for the famous blue tarps from FEMA.

Meanwhile, in an unprecedented exodus, thousands of Puerto Ricans are heading to the U.S. They go in search of work, medical treatment and, above all, education for their daughters and sons.

In just four hours at the Luis Muñoz Marín airport in San Juan — a privatized airport in the hands of a Mexican company — I observed three flights to different cities: Atlanta, Orlando and Philadelphia. Each flight carried approximately 200 passengers — entire families, some even with their pets. And this was just one airline.

Six hundred people in four hours. Approximately 100,000 Boricuas are believed to have left in little more than a month. Whether temporarily or permanently, this exodus is another economic, political and cultural crisis.

There is much to talk about: the Fiscal Control Board and how it seeks to expand its powers on the island; who is truly governing in PR; the schemes for corruption; unemployment; and many more topics.

Attack on education and fightback

However, one aspect just cannot be ignored at this time. And it is education, the basis for the future of the country and one of the first causes of migration.

The subject of education also demonstrates the complexity of life in PR at this time.

Brigades of people go from site to site to clean up. Most of the clearing of the roads has been done by the people themselves within their communities and with organizations that have been set up to solve the immediate problems as best they can.

Teachers have also joined in this effort. However, teachers also find themselves in an open struggle organizing schools and communities to defend public education.

Privatization of education was part of the neoliberal plan before Maria. The Boston Group had recommended the closing of 500 schools; 179 had already closed their doors before the hurricane. Education Secretary Julia Keleher, a North American born in Philadelphia whose salary is more than $20,000 a month, was actually hired to privatize PR public education.

Her objective is to open charter schools. It is no accident that U.S. Secretary of Education Betsy DeVos — known for her privatizing efforts — visited Puerto Rico and the U.S. Virgin Islands in recent days.

After Hurricane Maria devastated the schools, parents and teachers joined together at the national level to clean up debris and try to restore the schools in their communities. Dozens of them were ready to begin receiving students. However, Secretary Keleher prohibited them from opening. She also prohibited the use of school cafeterias, which might have been the only source of nutrition for the students.

Faced with this scenario, the Federation of Teachers of Puerto Rico began a campaign to demand the opening of schools that were in suitable condition.

The schools earmarked to remain permanently closed are in the poorest parts of the country, both in the mountains and on the coast. Students will have no other school to go to nearby; closing them will deny education to the people.

Keleher and the privatizing entities, however, face a people determined to defend their education. Parents along with teachers organize meetings to discuss the steps needed to reopen their schools. To get the news media to report on their actions, they organize pickets early in the morning in front of schools demanding they open.

In Old San Juan, this writer participated in a picket in front of the Abraham Lincoln School. This school serves the students in the famous neighborhood of La Perla. The school looked in perfect condition and had been used as a community center to provide and coordinate aid during the days following the hurricane. That same day, while we were picketing in front of the school, we found out it was being used to prepare lunches so the governor’s spouse could give them out at other sites. However, the Department of Education and Secretary Keleher want to keep it closed and prevent the children of La Perla from getting an education.

Despite the secretary’s refusal to open dozens of schools, the mobilization of parents, teachers and the community in general is forcing the opening of more schools each day.