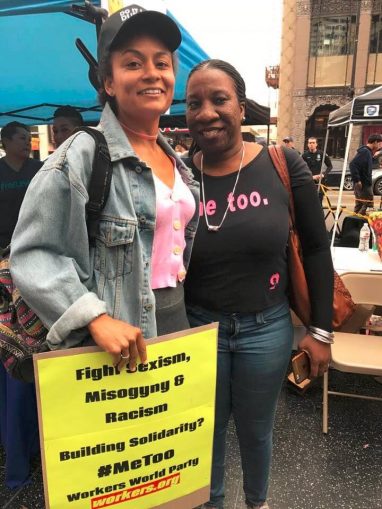 There are times when a few words speak volumes. “Me too” succinctly expresses the pain of millions of women and others who retweeted the hashtag or posted on Facebook, saying they too had experienced sexual harassment and sexual assault in the workplace.

The #MeToo campaign was a reaction to the publicity around the criminal sexual abuse perpetrated by Hollywood mogul Harvey Weinstein. Since that story broke, about 80 actors, models and other industry professionals have come out publicly with horror stories of molestation and even rape. Oscar winners have been among those exposing Weinstein’s 30+-year pattern of misogynistic conduct.

All of these abuse survivors demonstrated tremendous strength and courage.

The Weinstein story followed earlier revelations about Fox News executive Roger Ailes and right-wing commentator Bill O’Reilly, not to mention the bigot in chief’s unchecked bravado around vagina-grabbing. Now dozens of high-profile personalities in media, entertainment, commerce and politics (Democrats as well as Republicans) have been identified as purveyors of workplace sexual abuse.

Former Alabama Supreme Court Justice Roy Moore, who at one time adamantly displayed the Ten Commandments as “the law” in his court chambers, has been named by women who were underaged teenagers when he allegedly assaulted them. Now a candidate for the Senate, he was a 30-something county district attorney at the time.

The ruling class, through its mass media and political mouthpieces, indoctrinates the masses with its class perspective. As Karl Marx explained, the dominant ideas of any age are the ideas of its ruling class. Today they’re from the owners of capital.

Despite all the gains of the women’s and LGBTQ liberation movements, the rich and powerful still view women, young men and nonbinary and trans people who work for them — even “big stars” — as property to be exploited economically and sexually. Sexual abuse pervades the entire news, publishing and entertainment industry under capitalism — an industry that perpetuates woman-hating, racist, xenophobic, anti-LGBTQ and anti-working class stereotypes for mass consumption.

So the experiences of well-paid professional women who felt relatively safe speaking out are not even the tip of the iceberg. The vast majority of workplace sexual abuse survivors labor at menial jobs at subsistence wages. If, in a 24-hour timeframe, 12 million posted their “#MeToo” stories on social media, how many tens of millions who work in retail, food service, factory, health care, agricultural, domestic, public and other sectors are suffering in silence?

And how many LGBTQ workers are being doubly targeted by bigoted bosses?

Despite Anita Hill’s role in 1991 describing sexual harassment by current U.S. Supreme Court Justice Clarence Thomas, women of color remain marginalized in public discourse on this injustice. Yet they have been dealt the harshest treatment, from abuses suffered during the theft of Indigenous lands and chattel slavery to present day immigration raids that render Latinas and other women of color vulnerable. Witness the 2011 sexual assault of African immigrant hotel housekeeper Nafissatou Diallo by former International Monetary Fund President Dominique Strauss-Kahn.

But isn’t any kind of sexual harassment illegal now? Since 1986, sexual harassment has been legally recognized as a specific form of sex discrimination under Title VII of the 1964 Civil Rights Act. Yet the state and federal agencies charged with enforcing the law have not made even a dent in the problem. Why?

For millennia privileged men have circumvented whatever protections might exist — and until three decades ago there were no legal ones for working class and oppressed people. Today’s workplace sexual abuse and assault is yet one more vile way for bosses to attempt to intimidate, divide and control workers who are just trying to survive in a cold, hostile, unjust capitalist world.

The prevalence of workplace sexual violence is another reminder of the irreconcilable antagonism between labor and capital. Putting an end to all systems of exploitation will finally enable humanity to rid itself of the entrenched patriarchy that only serves the interest of the bosses.