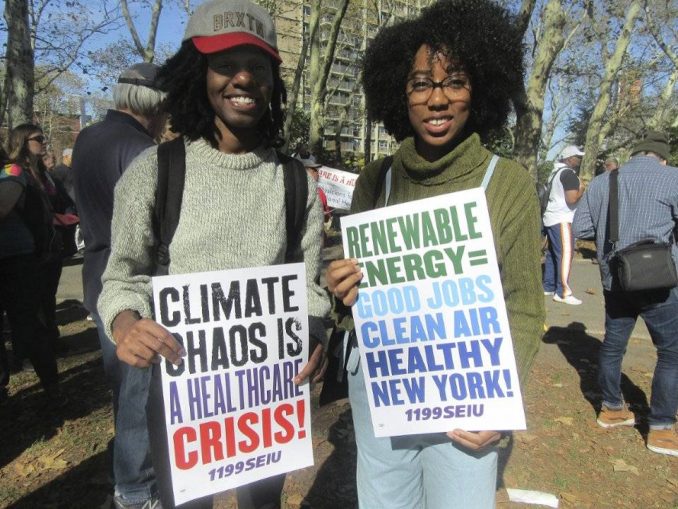 New York — Led by youth of color, thousands rallied and marched into Manhattan over the Brooklyn Bridge on Oct. 28 to commemorate those lost five years ago in the devastation dealt by Hurricane Sandy. Speakers called for action on climate change linked to increased hurricane fury and also for “no pipelines!” They raised colorful banners calling for absent politicians to take responsibility: ”Mayor De Blasio, Gov. Cuomo and Sen. Schumer: Where were they?”

Victims from several Southern states hit by hurricanes, as well as those from recently devastated Haiti and Puerto Rico, spoke. A nurse from the New York State Nurses Association also connected via cell phone to some of their nurses now volunteering medical assistance in Puerto Rico. NYSNA union leader Judy Gonzalez, R.N., denounced the “disastrous politics of the ruling class” citing Puerto Ricans “who have lost everything.” Other unions participated in the march, including the Professional Staff Congress of the City University of New York (CUNY).

Along with climate neglect and damage by big business and government, speakers highlighted the disproportionate suffering and loss by poor communities that include a majority of people of color. Bilingual chants in English and Spanish resounded in the march as it left Brooklyn, crossing the bridge to end with a rally in support of Chinatown’s public housing in downtown Manhattan.

There, speakers denounced cuts in public housing and the displacement of renters by gentrification. They pointed to the crisis of climate change, as past and current hurricanes leave millions stormed out of housing and homeless, their circumstances worsened by racist policies, the continuing impact of past colonial occupation and banking industry profiteering.

One banner in the march proclaimed: “The storm began in 1492. End white supremacy!”