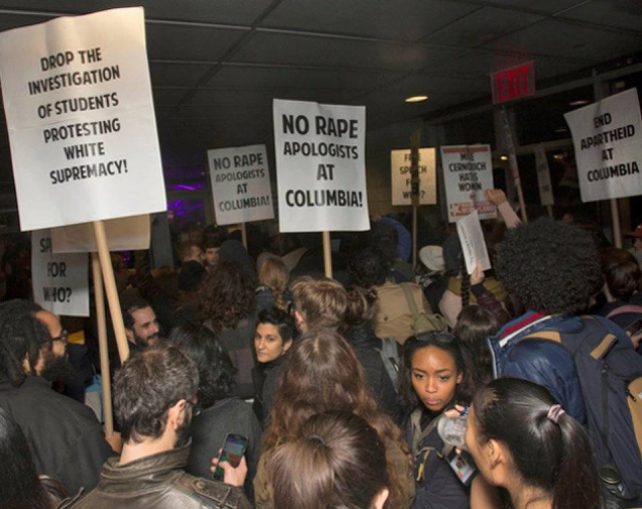 New York —After a storm of criticism, Columbia University administrators have stopped their investigation of students who shut down the October appearance of a white supremacist there. Columbia has centuries of ties to white supremacy.

The students were being investigated for violating the Rules of University Conduct. While under investigation, they were banned from events held by Columbia University College Republicans, which hosted Robinson, according to the Columbia Daily Spectator, the student newspaper.

Students had sent a letter to Columbia University President Lee Bollinger before Robinson’s event, arguing that he presented a “genuine threat of harassment to marginalized groups on campus.” (Daily Spectator, Nov. 2)

The investigation appalled more than 100 faculty members, who signed a letter to Bollinger in defense of the 19 students.

The faculty letter criticized the “overreaction of the University to student protest through the aggressive and discriminatory and arbitrary enforcement of the Rules of University Conduct.” The letter added that “the administration seems committed to using ‘free speech principles’ as an opportunity to prosecute students for their reasonable efforts to critically engage biased, exclusionary and anti-democratic speakers brought to campus.” (tinyurl.com/y9gavdow)

Goldberg’s decision to drop the charges was sent to students just a few hours before white supremacist and rape apologist Mike Cernovich — of Pizzagate conspiracy-theory infamy — spoke Oct. 30 at Lerner Hall on the Morningside Campus.

That didn’t stop more than 100 students and activists who marched onto campus and jammed their way into the lobby of the hall, halted only by security and New York Police Department officers. Cernovich was reportedly able to speak to only a tiny group and then fled through a side door to 114th Street, despite students’ efforts to confront him.

The Oct. 30 protest began with a NYC Shut It Down demonstration to honor Rev. Clementa Carlos Pinkney, who was gunned down in 2015 along with eight other congregants by white supremacist Dylann Roof at the Mother Emanuel African Methodist Episcopal Church in Charleston, S.C. Jamel Mims, an organizer with Refuse Fascism, reminded the crowd that a demonstration of rage against Cernovich was not enough. Other organizations in the anti-Cernovich protest included the Liberation Coalition, Workers World Party and People’s Power Assemblies.

Although students avoided prosecution for their protest on Oct. 30, students and oppressed peoples of Harlem have long waged war against the oppressive institution of Columbia.

The university was founded as King’s College in 1754, with just eight students in what is now the city’s financial district. It later moved to midtown, then up to its current location in Harlem. Slavery has been tied to the university since its founding.

“Of the ten men who served as presidents of King’s and Columbia between 1754 and the end of the Civil War, at least half owned slaves at one point in their lives,” according to the Columbia University & Slavery project.

In 1968, Columbia came under attack when it proposed to build a gymnasium and limit entry by area residents to a backdoor — a racist slight to the mostly historic Black neighborhood to the north and east of campus. Students who seized and occupied campus administration buildings in solidarity with the community were bloodied when the administration called on the police to remove them. Gymnasium plans were dropped.

Gentrification of working-class neighborhoods of people of color reared its ugly, colonizing head again in the 1990s and 2000s with massive plans for expansion to make the university “competitive” with other Ivy League schools.

Students compelled the shutdown of a campus event in 2006 featuring the Minutemen Project, a racist, anti-immigrant, vigilante organization.

Students currently active in the struggle to keep Columbia free of white- supremacist speakers and organizers have vowed to keep fighting and not to be intimidated by the administration’s threats.