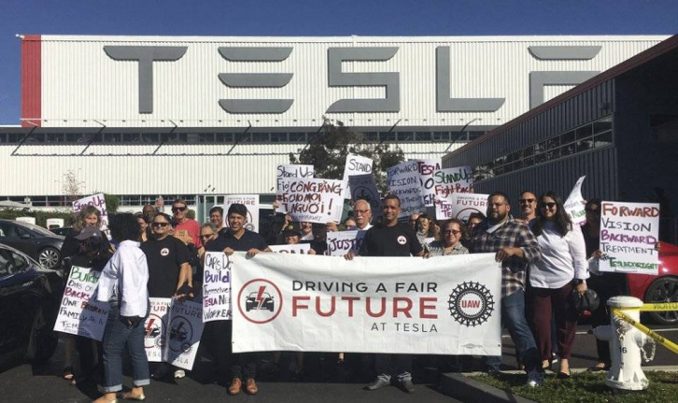 After Tesla workers, who build zero-emission electric cars, rallied outside the Fremont, Calif., factory on Oct. 24 to protest recent firings, they marched into the plant to drive home their demand to rehire the workers. They accused Tesla bosses of targeting workers who had complained about working conditions. This action follows a National Labor Relations Board ruling that Tesla violated the workers’ rights by discouraging their efforts to unionize. Tesla must attend a hearing before an NLRB administrative law judge on Nov. 14 in Oakland. The complaint against Tesla was filed in August by the United Auto Workers.

In the workers’ letter to Tesla management about the protest, they noted that while Tesla is important for “the regional economy” as an employer of thousands: “[W]e expect Tesla to be a responsible employer that leads with fair treatment of its workers. Among the fired workers are people who have raised their voices with concerns about health and safety risks, fair pay and the right to organize free from intimidation, and we are concerned that these workers may have been unjustly fired for doing so.” (Business Insider, Oct. 24)

What’s exciting is that Tesla workers, who are on the leading edge of 21st-century auto making, were paying homage to UAW history by taking their demands into the plant. The 1936-37 sit-down strike in Flint, Mich. — which ended 80 years ago — helped establish the UAW. On with today’s struggle!

Dining hall workers at Northeastern University in Boston were set to strike Oct. 4. But only hours before, they ratified a five-year contract significantly raising members’ wages by $5.65 an hour. The workers were inspired by a 22-day strike at Harvard last fall, when UNITE HERE Local 26 dining hall workers fought hard for and won a contract guaranteeing a living annual wage of $35,000 for full-time workers. (See extensive coverage in WW.)

In addition to increasing the number of full-time workers, the contract stipulates that the university will now cover 97 percent of health care insurance; provisions for immigrant workers were expanded and nondiscrimination language was strengthened, including gender identity and expression; and there are more sick days and new snow days. The workers will also be able to join Local 26’s pension plan to save for retirement. (Local26.org, Oct. 10)

The bosses at the Rose Hills Memorial Park & Mortuaries were acting like horror movie monsters, but that didn’t stop the gravediggers, who bury 7,000 people a year at Los Angeles’ largest cemetery. On Friday, Oct. 13, the National Labor Review Board certified election results and handed a victory to the mostly Latinx “internment specialists” under the wing of Service Employees Union Local 265.

When the workers began organizing, management wielded standard tactics, along with some intimidating tricks. Anti-union consultants held meetings once and then twice a week leading up to the vote. They tried to scare younger workers with threats that promotions would be frozen if they voted union. Then they offered a treat by raising wages a month before the vote. After sending friendly letters to workers’ homes, they resorted to mind games. Attempting to instill fear, management hired subcontractors and forced the workers to train them. But the workers saw through the anti-union fog and trusted the union more than the vampire bosses. (LA Weekly, Oct. 14)

Though Hilton workers, many of them women of color, can’t talk about contract terms still on the table, a mid-October rally, covered by Best of New Orleans, revealed some of the issues — from badly needed raises to consecutive days off. A major problem is that management often schedules workers for a late shift, followed the next day by an early one.

Than Dao, a cocktail server at a Local 2262 casino, told BNO she had worked for 16 years at $5 to $6 an hour. She got a raise with Local 26 and thinks the casino respects workers now. Unions give workers a new set of power tools.