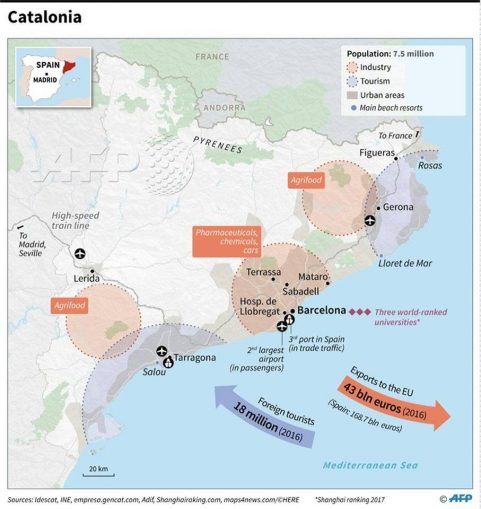 Oct. 31 — This morning Carles Puigdemont, the president of Catalonia who was deposed by the force of the Spanish state, announced from Brussels that he and the six Catalan government members with him would not ask for asylum in Belgium. Instead, he told the media they came for a little quiet space to “contribute to the internationalization of the process” in Catalonia. (El Periódico, Oct. 31)

A flurry of moves and countermoves between the repressive Spanish state and the defiant Catalan government led to this situation today. The regime in Madrid is beginning to seize the administration, police and public media from the regional government in what some have called a coup d’état. It has also declared new elections in the region on Dec. 21.

While big banks and the big bourgeoisie in Catalan oppose independence — they’ve already moved their headquarters outside the region — a less powerful sector is pro-independence. Today Puigdemont and six other top bourgeois leaders of Catalonia’s independence movement are in Belgium, facing charges of “rebellion, sedition and misuse of funds” in the Spanish state. Despite the charges, their parties say they will participate in the Dec. 21 elections.

Catalonia is one of the more prosperous regions, located in northeastern Spain, an area the size of Maryland, with a population of 7.5 million people, including many from other parts of the Spanish state and from abroad.

The brutal tactics of the Spanish state, which injured 900 Catalans for trying to vote in the Oct. 1 referendum, aroused strong popular resistance. Tens of thousands of people formed the Committees to Defend the Referendum — spontaneous mass organizations with leftist participation that organized and mobilized for the referendum despite repression.

While the bourgeois leadership of the Catalan independence movement — represented by Puigdemont and the others in Belgium — made a call for peaceful resistance to the central regime’s takeover, they are no longer on the ground in Catalonia to lead this effort. It is too early to see, especially from afar, how Puigdemont’s decision to try to avoid direct confrontation and to participate in the Dec. 21 elections will impact the morale of the popular movement.

An important question remains: Are there forces in Catalonia from the left and workers’ organizations that can mobilize resistance to the Spanish state’s takeover?

Important because the working class in Catalonia and in the entire Spanish state suffers from high unemployment, cutbacks to health care, education and pensions and a lack of prospects that it has faced since the 2008 worldwide capitalist financial crisis hit Spain so hard. Popular resistance in Catalonia can inspire resistance to the Madrid regime throughout the Spanish state.

After a majority of voters opted for Catalan independence, Madrid took the offensive more than a week ago by arresting two members of the Catalan government. Then Spain’s rightist Prime Minister Mariano Rajoy declared on Oct. 21 that the central government would seize control of Catalonia’s administration and force a new vote to reconstitute the regional parliament.

The Catalan parliament voted 70-10 to declare independence on Oct. 27. The 55 members of parties opposing independence refused to take part in the vote.

On Oct. 28, the Spanish state fired the head of the Catalan police and deposed Puigdemont.

The next day, Sunday, Oct. 29, all the pro-Spanish-state parties, led by Rajoy’s right-wing governing party and including all the ultra-right and neo-fascist organizations, mobilized hundreds of thousands of people in Barcelona, Catalonia’s capital, on the basis of a united Spain under the rule of the rightist parties in Madrid and the Spanish king.

The current regime controlling the Spanish state is led by the Popular Party, a rightist party that absorbed many of those who made up Francisco Franco’s fascist regime from 1939 to his death in 1975. The PP, along with the so-called Socialists (PSOE), have directed the government since the 1978 “Transition,” which is really a continuation of rule by the oligarchs with a democratic facade and a corrupt monarchy.

Remember that Spain is an integral part of the imperialist world, with membership in NATO, and it participates in most of the aggressive wars led by U.S. imperialism.

Although not all the Oct. 29 demonstrators were as right-wing as the organizers — who encouraged chants like “Long live Spain” and “Arrest Puigdemont” — Spanish patriotism serves reactionary interests there just as U.S. patriotism serves imperialist interests here.

On Oct. 30, Spain’s Attorney General José Manuel Maza said he would ask the national court to charge 14 members of Puigdemont’s administration with pushing ahead with independence, which he claimed was in defiance of Spain’s constitution and constitutional court. These include the serious charges of rebellion — with a possible 30-year sentence — sedition and misuse of funds.

Anticipating this attack, sometime in the night of Oct. 29-30, Puigdemont and six government members drove to Marseille, France, and took a plane to ­Brussels.