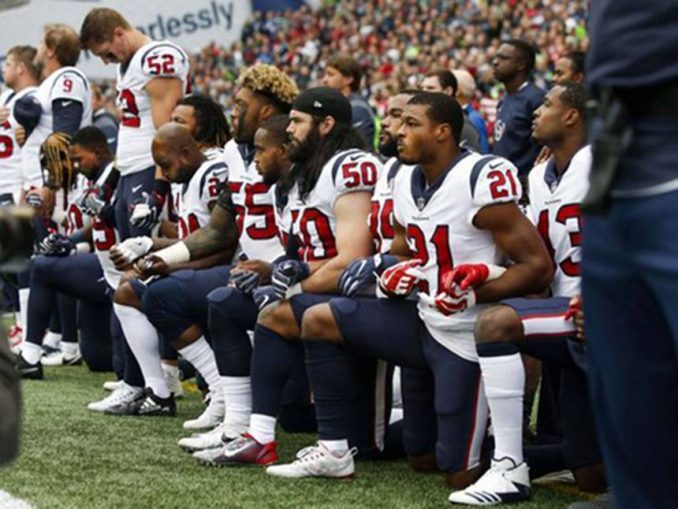 Before week eight of the National Football League’s 2017 season, no member of the Houston Texans team had taken a knee in protest during the playing of the national anthem. That all changed dramatically when, on Oct. 29, right before their away game with the Seattle Seahawks, at least 30 Texans players knelt in unity to protest Texans’ owner Bob McNair’s racist remark. It was reported that the vast majority of the Seahawks home crowd gave the Texans players a standing ovation.

The sports channel ESPN revealed that at an owners-only meeting held almost two weeks ago in New York City, the billionaire owner McNair, one of the biggest contributors to Donald Trump’s presidential campaign, stated that “we can’t have the inmates running the prison.” (USA Today, Oct. 29)

Several Seahawks sat during the anthem, led by defensive end Michael Bennett, one of the most outspoken players in the NFL. Bennett was racially profiled in late August by the Las Vegas police, who put a gun to his head while he was handcuffed. Bennett took another knee during the game after sacking Texans quarterback DeShaun Watson.

The “inmates” that McNair was referring to were the players, as much as he tried to deny the analogy. Once his comment was made public on Oct. 27, many of the players considered a spontaneous walkout from the Texans’ practice facility. Two Texans players, D’Onta Foreman and DeAndre Hopkins, boycotted practice on Oct. 28 after McNair “apologized” to the team.

McNair made the statement while owners were discussing whether to bench players on their individual teams if they took a knee during the anthem to either protest police brutality and racial inequality or in solidarity with former San Francisco 49ers quarterback Colin Kaepernick, who began the anthem protest during the 2016 season. The owners, in defiance of Trump’s demand for the owners to punish players, decided not to take such actions, at least for the present moment.

Kaepernick has filed a grievance against NFL owners, charging them with collusion for keeping him locked out from getting a job this season. He opted out of his 49ers contract in March. Various teams have carried on Kaepernick’s protest during the 2017 season by taking a knee.

McNair’s statement should not be viewed in isolation, but reflects the objective relationship that exists between team owners and the players — the owners are like other bosses, who expect their workers to just keep their mouths shut when it comes to social issues, especially police brutality, and be happy to get well paid while being superexploited.

And because the NFL is at least 70 percent African American, while the NFL owners are 99 percent white, McNair’s racism shows that these players are demonized no differently than the huge disproportionate number of prisoners in the U.S. who are Black.

However, as these players become more disrespected by these owners, they will become more and more rebellious, just like enslaved field workers against the plantation masters.