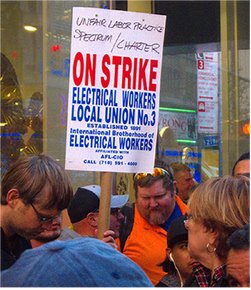 Some 1,800 workers of Spectrum, a part of Charter Communications that provides telephone, TV and internet services to customers in New York City, have been on strike for the past seven months. On Oct. 30, the NYC Central Labor Council held a large and militant rally that filled two blocks on Broadway, south of Times Square.

One of the points that seemed to cause the most anger was that the chairperson of Charter Communications is paid $98 million a year.