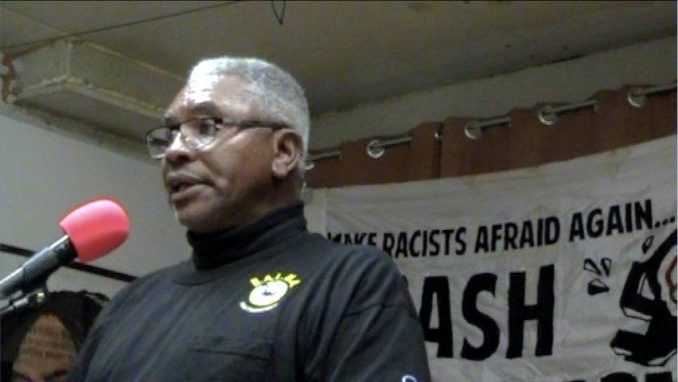 New York — Clarence Thomas, a retired rank-and-file member of International Longshore and Warehouse Union Local 10 in the Bay Area, Calif., spoke at an Oct. 10 Workers World Party political discussion here on “Why workers must fight white supremacy.”  Thomas was a founding member of the Million Worker March, a coalition of Black trade unionists from around the country who called for workers to speak in “our own name” and not as an appendage to the Democratic and Republican parties during the 2004 presidential election.

The MWM public call to action stated: “The time has come to mobilize working people for our own agenda. Let us end subservience to the power of the privileged few and their monopoly of the political process in America.”

At the Oct. 10 meeting, Thomas’ presentation focused on the struggle against white supremacy during the Great Depression of the 1930s, especially the heroic efforts made to bring Black workers into the ILWU, led by Harry Bridges, an Australian immigrant unionist. This was a revolutionary act since at the time most Black workers were forced to scab during strikes or else languish in low-wage jobs while locked out of all-white, closed-shop, skilled crafts unions.

Thomas also spoke about the heroic shutting down of West Coast docks since the 1980s, mainly on May Day, International Workers Day, in political solidarity with oppressed peoples’ struggles around the world. These work stoppages include against the apartheid regime of South Africa, the Zionist regime of Israel, police brutality and for the freedom of political prisoner Mumia Abu-Jamal.

Thomas stated that global capitalism exploits all workers, be they dockworkers, prisoners, migrants or NFL players. That is precisely why, he emphasized, that all workers must unite and resist a system that relies on white supremacy for its very existence.