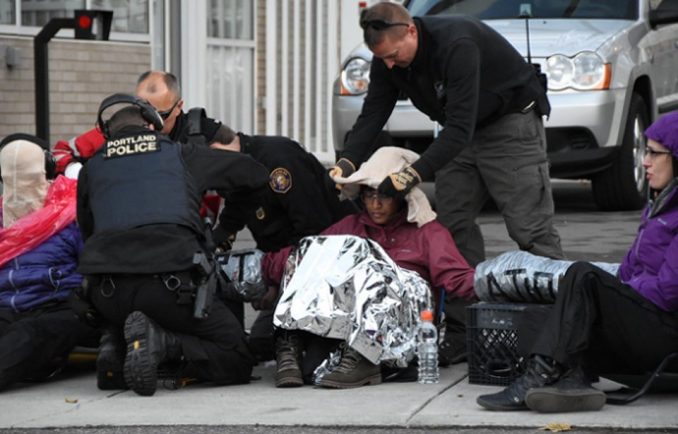 Scores of courageous protesters assembled outside the offices of U.S. Immigration and Customs Enforcement (ICE) in southwestern Portland on Oct. 11. They then went into motion to stop a bus taking a group of immigrants to a detention facility in Tacoma, Wash., for deportation.

The protesters’ tactic succeeded in significantly delaying ICE’s ghoulish work. As for the Abu-Ghraib-like hooding of protesters, it’s irrelevant whether the pigs were just trying to keep from getting sued, or it was an intimidation tactic on their part. While the protesters’ bonds were being ripped apart outside the ICE offices, families and lives were being torn apart inside the building.

All five of the protesters have been released. In a statement from the protesters, they correctly state that their “gentle” treatment at the hands of the authorities stands in stark contrast to the torturous conditions endured by those people facing deportation.

The Northwest Detention Center in Tacoma, Wash., where the bus was heading, is privately owned by the GEO company and is the fourth largest immigrant prison in the U.S. Opened in 2004, the center faced allegations of human rights abuse in 2008 when an investigation published through Seattle University’s School of Law confirmed that the facility “violate(d) international human rights law.” Since then, the detention center’s capacity has more than tripled from an initial 1,575 detainees.