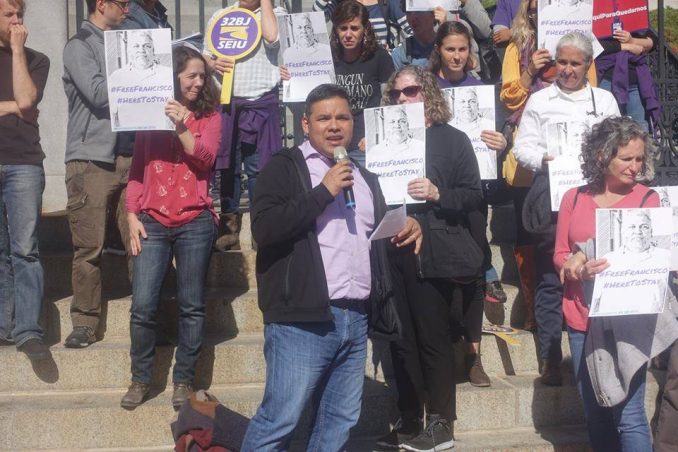 A noontime crowd of immigrant rights organizations, community leaders and unions rallied on Oct. 13 in front of the Massachusetts State House to demand justice for Francisco Rodriguez on the three-month anniversary of his detention. The demonstrators also spoke out in solidarity with all 11 million undocumented workers in the U.S.

Groups representing immigrants and migrants and a broad array of union and community supporters are waging a campaign to pressure state officials to release Rodriguez from the Suffolk County House of Correction. They are also demanding a halt to Department of Homeland Security deportation proceedings against him and others languishing in detention.

Rodriguez is an active and vocal member of Service Employees (SEIU) Local 32BJ and a janitor at the Massachusetts Institute of Technology. He was detained by immigration officials during his check-in on July 13 at Immigration and Customs Enforcement offices in Burlington, Mass. While he was held in detention, his spouse gave birth to their baby, Josue Mateo. Rodriguez was not permitted to be present at the birth, nor has he yet held his newest child.

This kind of devastating separation from loved ones is a cruel reality for thousands of detainees. But fiercely determined people continue to fight to turn the tide and free Francisco Rodriguez and others.