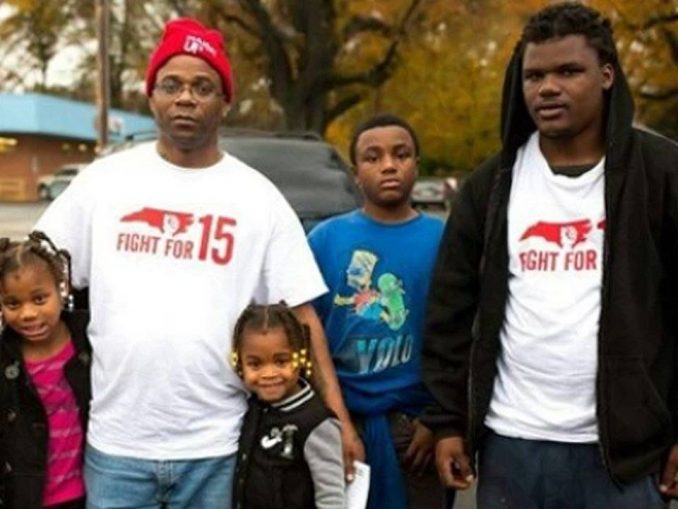 In another racist act of injustice in the Durham County police and court system, Abdul Burnette, 20 years old, was arrested Sept. 23 for three misdemeanor charges — but was given a $10,000 bond, typical of felony charges. His father, also named Abdul, a fast food worker and leader in the local Fight For $15 movement, was not allowed to bond him out.

Before Burnette was convicted of any crime, a judge sentenced him to a 60-day drug rehab program in the jail. According to his family, Burnette has mild autism and is not competent to stand trial. Due to his medical condition, he is required to take medication, though his family is not allowed to provide it. Instead, the Durham County Jail is now charging him $20 per pill, a serious financial burden on Abdul and his family.

Recently, young Abdul was attacked by another inmate. In self-defense he fought back. He is now placed on “lock-back” solitary confinement for the next 30 days, and all family visitations have been cut off.

Earlier this year, on April 24, young Abdul was also assaulted by a Durham police officer. His father has filed a complaint with Internal Affairs of the Durham Police Department and that is still under investigation. “The Durham County Jail is violating my son’s constitutional rights. We are going to keep fighting until we get justice!” stated Abdul Burnette, the father.

The case of Abdul Burnette is happening amid many local struggles against events at the Durham County Jail, including five deaths of inmates in recent years and, on March 23, that of 17-year-old Uniece “Niecey” Fennel.

Starting the week of Oct. 15, the Durham County Jail plans to deny all family and friends the basic right to in-person visits with their loved ones. Instead, the jail will begin “video visitation” only, forcing all communication through a screen in a “service” run by a private corporation.

An organizing leaflet distributed by the Inside-Outside Alliance as part of the struggle for Burnette and against the Durham County Jail lists these demands:

Full access to affordable health care for all inmates!

End the contracts with the abusive, exploitative corporations!

The Inside-Outside Alliance also issued a call to action for weekly demonstrations at the Durham County Jail,  219 S. Mangum St., 6 p.m., every Friday.

To donate to the Fight for Justice for Abdul Burnette and All Durham County Jail Inmates, go to www.youcaring.com/abdulburnette-978498.