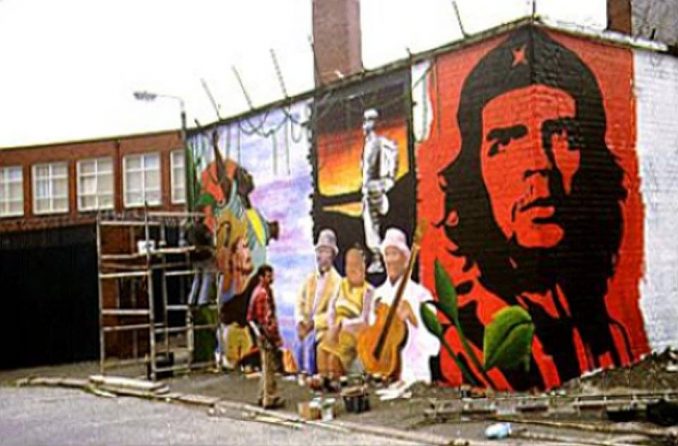 Che mural in Belfast, northern Ireland. His father, Ernesto Guevara Lynch, said in 1969: ‘In my son’s veins flowed the blood of the Irish rebels.’

Ernesto “Che” Guevara — the great internationalist and revolutionary leader — died 50 years ago on Oct. 9, 1967, at the hands of Bolivian soldiers who were trained, equipped and put in motion by U.S. Green Beret and CIA operatives.

His killers posed with his body to boast and prove his death. But Che’s last words proved their defeat and his victory: “Shoot, cowards. You are only going to kill a man.”

Immediately after his death, protests against Che’s murder at the behest of the U.S. erupted worldwide, from Mexico to Algeria, from Cairo to Calcutta. In France, those demonstrations built toward the 1968 general strike and student uprising that brought the country’s economy to a virtual standstill.

In Cuba, 1968 was declared the Year of the Heroic Guerilla, beginning the still ongoing travel by Cubans to Africa and Latin America to complete internationalist missions originating in Che’s example.

Fifty years later, murals of Che and his words still inspire people in the U.S., from Los Angeles to Chicago to an obscure side street garden in Syracuse, N.Y.

Bourgeois writers argue that the millions who wear Che T-shirts, or engrave his name on their bodies with tattoos, are doing so as a fashion fad or a romantic fantasy. They say people do not really know what Che represents.

A stone-cold answer to that came, amazingly, at a 2016 graduation ceremony at the U.S. Military Academy in West Point, N.Y. Documented later in social media, a cadet pulled aside his formal uniform vest — and revealed Che’s implacable face underneath. Anticipating comments that this was only an ironic gesture, the cadet then flipped his regulation hat over to reveal a scrawled, defiant message: “Communism will win.”

Che still lives. How and why?

Che was an Argentine physician with a lifelong asthma disability, a husband and father, a guerilla warfare and military tactical genius, an economist and minister of industries in revolutionary Cuba — and a Marxist-Leninist communist to his dying breath.

When he said at his end, “You will only kill a man,” those words were imbued with his absolute understanding of the interconnectedness of the worldwide struggle against imperialism and capitalism, which he knew would continue after his death, without fail.

Imprinted on the hearts and minds of those who have come after is Che’s passionate devotion to the world’s oppressed, best known perhaps in his words: “At the risk of seeming ridiculous, let me say that the true revolutionary is guided by a great feeling of love. It is impossible to think of a genuine revolutionary lacking this quality. … We must strive every day so that this love of living humanity will be transformed into actual deeds, into acts that serve as examples, as a moving force.” (“Socialism and Man in Cuba,” 1965)

But Che’s unrelenting commitment to internationalism, rooted in Marxist materialist analysis, is equally crucial to understanding his continuing vitality into the 21st century. In 1965 remarks to the Afro-Asian Conference in Algeria, Che said: “There are no borders in this struggle to the death. We cannot be indifferent to what happens anywhere in the world, because a victory by any country over imperialism is our victory.”

From his guerilla camp in Bolivia, the April before his assassination, Che sent a strong internationalist message to the Tricontinental Solidarity organization in Havana: “We must bear in mind that imperialism is a world system, the last stage of capitalism — and it must be defeated in a world confrontation. The strategic end of this struggle should be the destruction of imperialism. Our share, the responsibility of the exploited and underdeveloped of the world, is to eliminate the foundations of imperialism.”

Che lives on in Bolivia. There Manuel Cortez, farming next door to the schoolhouse where Che was assassinated, said: “It’s like he is alive and with us, like a friend. We say, ‘Che, help us with our work or with this planting,’ and it always goes well.” (Knight-Ridder News, Aug. 17, 2004)

Che lives on throughout Africa. There Thomas Sankara, a Marxist revolutionary, pan-Africanist and president of Burkina Faso, said: “Che Guevara taught us we could dare to have confidence in ourselves, confidence in our abilities. He instilled in us the conviction that struggle is our only recourse. … That is why we say that Che Guevara is also African and Burkinabè.” (Akinyemi Adeseye, “‘We Are Heirs of the World’s Revolutions’: Lessons from Thomas Sankara,” 2010)

The oppressed of the world continue to embrace Che — because Che embraced them in the struggle.

Fidel Castro said on the 40th anniversary of Che’s death: “Why did they think that by killing him, he would cease to exist as a fighter? … Today he is in every place, wherever there is a just cause to defend.”

Che lives. In the words of the great Cuban poet Nicolás Guillén, as quoted in Granma on Oct. 8: