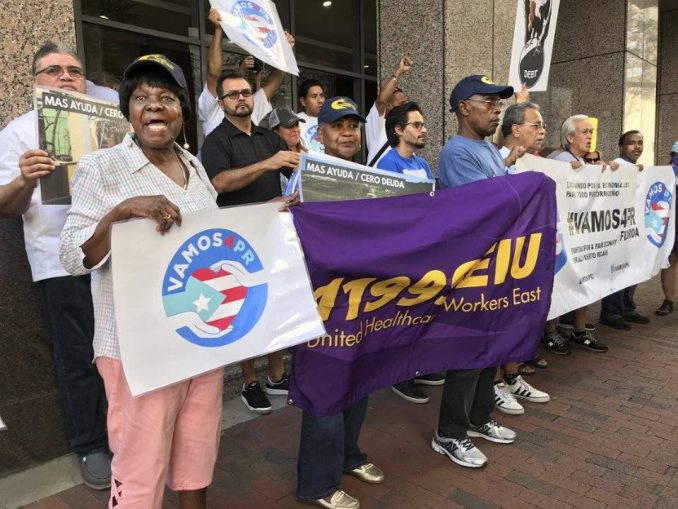 Orlando, Fla. — Dozens of Puerto Ricans in Orlando, whose families are suffering on the island after Hurricane Maria, gathered on Oct. 4 with community allies in front of Merrill Lynch, one of the island’s debt holders, to demand immediate and sufficient aid to relieve and rebuild Puerto Rico. They also called on Congress to cancel the island’s $72 billion debt burden so that Puerto Ricans can focus on rebuilding their communities instead of having to first pay the vulture funds.

The protest, which included a moment of silence for the people lost due to the hurricane, was part of a national day of action in 13 U.S. cities: Boston, Chicago, Los Angeles, Milwaukee, Minneapolis, New York, Philadelphia, Seattle; Hartford, Conn.; Newark, N.J.; Oakland, Calif.; Orlando, Fla.; and Washington, D.C.

“While families are struggling to survive, the hedge fund vultures have continued to go to the courts to make sure they get paid,” said Ruben Sanchez, a Service Employees Union retiree. “Puerto Ricans have already been suffering for decades, first from a long recession and then from the public service cuts that came with the debt crisis. That left the island especially vulnerable to a storm like Maria. It’s time to recognize that the debt is unpayable.”

The demonstration was initiated by Vamos4PR, a network of stateside organizations including SEIU and others supporting the struggle for a “fair economy for all Puerto Ricans.” (vamos4pr.org)

This crisis is sparking a resurgence of the movement for independence from the U.S., with demands not only for canceling the debt, but for reparations for the damage and exploitation done to the people and the island.

Across the country and around the world, the devastation in Puerto Rico and lack of government response is sparking working people to take relief into their own hands. Unions are collecting funds and sending members to help. The Teamsters and AFL-CIO are working together to recruit truck drivers to travel to Puerto Rico to help distribute a stockpile of relief supplies. (cnn.com, Sept. 30)

The AFL-CIO sent a group of 300 members to Puerto Rico, with over 17 tons of relief supplies, on a chartered plane Oct. 4 to assist in the recovery efforts. The group —  each of whom has volunteered two weeks of their own time — includes nurses, other health care professionals, transportation and construction workers, electricians, heavy equipment operators and other skilled workers, representing 20 unions from 17 states. The labor federation stated: “Our Union brothers and sisters remain in crisis in Puerto Rico and the Caribbean. So many working families have lost their homes, their workplaces and are struggling to survive. In the labor movement, solidarity is our strength.” (alfcio.org, Oct. 4)

Cuba, devastated by Hurricane Irma, has offered medical help, but it is unclear if Cuban health care professionals have been able to get to the island.

Puerto Rico is a modern-day colony of the United States, whose 3.4 million residents, though U.S. citizens, daily experience the most virulent racism and economic injustice. This was apparent during Trump’s visit to the hurricane-ravaged island on Oct. 3.

Speaking to reporters during a belated visit after two straight weekends spent golfing, Donald Trump offered these words: “I hate to tell you, Puerto Rico, but you’ve thrown our budget a little out of whack.”

Further unmasking his contempt for the Puerto Rican people, he was seen on television around the world throwing rolls of paper towels to those who had been selected to greet him, mocking the dire need for a major relief effort by the U.S. government. He ludicrously praised his efforts as “successful.”

Trump used Twitter to criticize her leadership and make racist claims about the Puerto Rican people. Cruz then wore a T-shirt that read “NASTY” in response to his racist and sexist comments.

Omaya Sosa Pascual, a reporter with the Center for Investigative Journalism in San Juan, was doubtful about the government’s official death-toll figure of 16. She spoke to dozens of doctors, administrators, morgue directors and funeral directors and, after going public, finally got Puerto Rico’s public safety secretary to confirm that there have been dozens more deaths than the official statistic reflects.

Sosa Pascual was told: “[T]he dead are at the hospital morgues, which are at capacity, and in remote places where the government has yet to go. In many cases, families are unaware of the deaths.” (vox.com, Oct. 3) The brother of a friend of this writer flew to the island to search in the mountains for their parents, who have not been heard from.

Initially power was knocked out of almost all hospitals, leading to life-threatening emergencies. Those facilities that are now running on generators have serious issues due to lack of fuel distribution. These days, just about every interaction within health care systems involves electricity, including hemodialysis machines and ventilators.

No electricity means no power to pump water into homes, no water to bathe or flush toilets. On Sept. 30, FEMA reported that only 45 percent of people have access to clean, potable water in their homes.

In May, Puerto Rico, which has a $103 billion economy, declared bankruptcy. It has since been trying to restructure more than $70 billion in debt. The island’s finances are currently controlled by a federal board, which has made just $1 billion available for relief.

Just before Maria struck, a horrific austerity plan for Puerto Rico, which would plunge many more people into poverty, was imposed on the people. Part of it includes the privatization of state entities such as the PR Electric Power Authority, especially its electricity-generating capacity, which produces the most profits. (Workers World, Oct. 4)

Certain U.S. policies have contributed to Puerto Rico’s economic deterioration. One of them is the Jones Act, an antiquated law that forces Puerto Ricans to pay nearly double for U.S. goods through various tariffs, fees and taxes. The act stipulates that any goods shipped from one U.S. port to another must be on U.S.-made-and-operated ships.

Other Caribbean islands are going through similar crises after being hit by hurricanes Maria and Irma. The island of Barbuda has been completely abandoned, and residents still can’t return home. Twenty-seven people died in Dominica. (vox.com, Oct. 3)

Ninety percent of the 100,000 residents of the U.S. Virgin Islands are without power and drinkable water. The airport and only hospital were badly damaged.

In Puerto Rico, Gov. Ricardo Rossello issued a blanket moratorium on public rent payments until January 2018. A spokeswoman for the Virgin Islands Territorial Emergency Management Agency, however, said no such arrangement was in place there. (theguardian.com, Oct. 8)