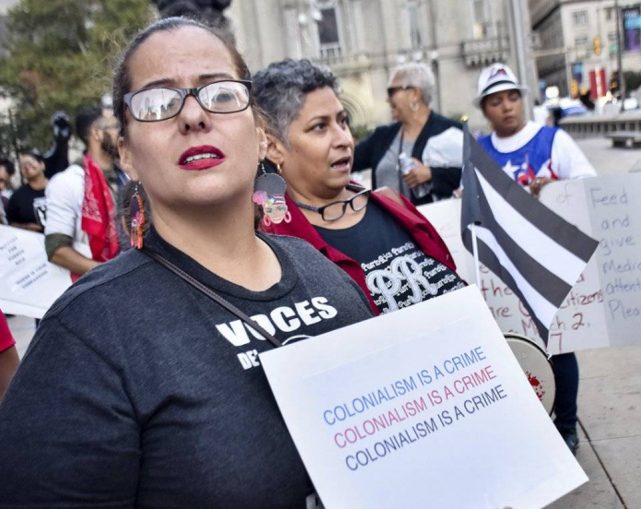 Initiated by Diaspora in Action, a loose collection of members of Philadelphia’s Puerto Rican community with strong ties to their island nation, the rally followed a week of organized events to collect material aid for Puerto Rico.

While organizers sought to increase public awareness of the humanitarian crisis their friends and families are suffering under, several speakers also addressed the century-old impact of imperialist colonization that is behind the crisis. Many participants carried signs in English and Spanish calling for cancellation of the $123 billion dollars in debt currently faced by Puerto Rico (Forbes, June 1, 2017), and for reparations for the island.

Speakers repeatedly challenged President Donald Trump’s excuses that as an island it was just “too difficult” to get support there. They pointed out that when the U.S. conducted military operations on Puerto Rico’s archipelago island of Vieques, they never had a problem getting ships there.

Rally organizer Kimberly Torres challenged Trump: “You can drop bombs on Afghanistan but you can’t drop food supplies to Puerto Rico?” Calling for a million Puerto Ricans to march in Washington, D.C., she challenged the crowd to “get angry!”

Former Philadelphia City Council member Angel Ortiz criticized the U.S. government for abandoning the people of Puerto Rico and trying to starve them out, as a part of the continuing land grab by Wall Street interests. He urged repeal of the Jones Act, passed in 1920, which mandates that only ships registered in the U.S. can carry goods by water between U.S. ports.

Ortiz concluded, “The people of Puerto Rico are not going to pay the debt. The U.S. owes us for 118 years of colonialism and exploitation. Puerto Rico belongs to Puerto Ricans!”

The growing anger over obvious racial disparity in the response to the impact of Hurricane Maria on Puerto Rico was expressed by several people. Diana Gonzalez recounted the legacy of U.S. colonialism and its continuing impact. “We didn’t ask the U.S. military to come to our island to rape our women or subject them by force to birth-control testing, and we sure didn’t ask for the debt you created.”

Gonzalez urged people to continue sending donations, noting that “when more stuff keeps arriving it puts pressure on them to release it.”

Johanna Janies, whose family lives in St. Croix, raised the lack of adequate response to the storm damage from two recent hurricanes on the U.S. Virgin Islands: “The U.S. bought our islands from the Dutch for military purposes 100 years ago. People from the U.S. always find time to come to our lands for vacations. They can’t just have us in the ‘good times’ and ignore us in the bad.”

“The way they have left Puerto Rico and the U.S. Virgin Islands is unacceptable,” Janies stated. “We need a continuous fight!”