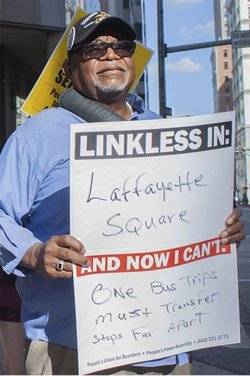 Dozens of protesters affiliated with the Baltimore Bus and Transit Riders’ Union, an organizing project of the Baltimore People’s Power Assembly, gathered outside the Maryland Transit Administration headquarters in downtown Baltimore on Sept. 27. Carrying signs that read “Restore and Expand Bus Service” and “Sink the Link,” protesters handed out literature and spoke on a megaphone about their experiences of being underserved by the MTA’s transit infrastructure — particularly the bus system, which was recently overhauled in June under the brand “BaltimoreLink.”

For Baltimore city and county residents, the name is a cruel joke. Nothing about the overhaul helps “link” anyone to anything, and Baltimore’s already crumbling transit infrastructure has become even less user-friendly. Adding insult to injury, the change came with a significant fare hike, the third in the last year.

The BaltimoreLink did not emerge out of a vacuum. When Republican Gov. Larry Hogan was elected in 2014, one of his first actions was to destroy a long-standing plan to provide Baltimore with an east-west light rail transit system, known as the Red Line.

Baltimore has been fighting to get east-west rail transit since 1965, but powerful elements invested in maintaining the segregation of white and Black, of rich and poor, have repeatedly shut these efforts down.

Millions of dollars and years of research were poured into the development of the Red Line, but Hogan called it an “expensive boondoggle” and slashed it. Instead the billions of dollars that would have gone into construction of the Red Line were poured into repaving roads in the suburbs and rural areas. The message is clear: Baltimore city doesn’t matter to the political forces in power, and the poor and working people of Baltimore who depend on transit to survive don’t matter either.

The BaltimoreLink, then, is a boondoggle of its own, a booby prize — a paltry substitute for any actual change or improvement for a huge, vibrant metropolitan area. However, it has proven to be a powerful mass issue for Baltimore city and county residents to rally around. As one protester, Ryan, put it, “The problems they promised to fix, they were not fixed, and now we are left with a very confusing, difficult-to-navigate system that still faces the same issues as before.”

Another protester, Glen Schmidt, shed light on some of the factors that led to the BaltimoreLink: “The MTA hasn’t done a destination study since 2008, so they don’t know where people need to go. They don’t know where they’re leaving from. That’s like putting the cart before the horse. In order to change the system, you need to know where people need to go.” Schmidt is vice president of the Baltimore Transit Equity Coalition, an organization that advocates for reinstatement of the Red Line.

The BaltimoreLink disaster impacts everyone who depends on the bus for their survival, but especially senior citizens, people with disabilities, youth and other vulnerable populations.

Ronald, a man with disabilities, spoke about getting caught in the back door of a BaltimoreLink bus and about his feelings of frustration trying to be heard afterwards by the bureaucracy: “I ended up hurting myself. I went to the hospital. I’m still trying to communicate and make a report. I go in the lobby. Nobody will come down and talk to me. I’m talking on the phone. They keep passing the buck, making excuses, saying they don’t have time. I’m just exhausted. I need somebody to help me.”

Ronald concluded: “I got on the wrong bus … and that’s how I ran into this [rally] today. I didn’t even know about this, but God works in mysterious ways. I ran into these guys, the Sink the Link, the Union for Riders. God bless them.”