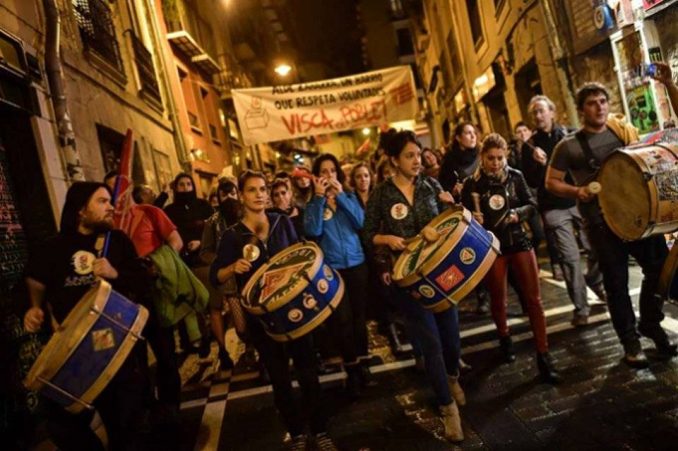 Marching in Barcelona on Oct. 1.

The Spanish state’s brutal attempt to repress the Oct. 1 referendum for self-determination of Catalan boomeranged on the Madrid regime. Instead of squelching the vote, brutality aroused massive anger and resistance. This boosted the independence movement of the Catalan people and pushed the working class to the front.

Instead, with local Catalan police standing aside, federal police tried to close voting centers, seize ballots and voting boxes, and finally used clubs and rubber bullets to attack groups of potential voters, bloodying heads, throwing men and women down steps, breaking bones and injuring 844 people, according to reports the next day.

Spain’s Prime Minister Mariano Rajoy of the People’s Party ordered the attack on Catalans. His center-right party supports the monarchy; it includes those who continue the policies of the fascist regime that won the Civil War in 1939.

When Rajoy sent shiploads of national police to the port of Barcelona, dockers refused to supply or unload the ships. Local firefighters helped other citizens protect the voting places. Masses mobilized to resist and carry out the vote.

While polls before the confrontation showed a majority of the 5 million eligible voters might have voted “No” to independence, the attack aroused those who felt the repression. More than 2 million people defied the police to vote, and 90 percent of them voted “Yes.”

Some tens of thousands of students marched Oct. 2 in the streets of Barcelona, the regional capital, chanting “We have chosen!” and “The streets belong to us.”

Dozens of Catalan unions have called for a general strike on Oct. 3. Before the Oct. 1 confrontation, two of the biggest union confederations, the Workers Commissions (CCOO) and the UGT, had not signed on to the strike. Now they have. Such a strike has the potential of moving the initiative for the struggle for self-determination closer to the working class and away from the pro-capitalist Catalan parties.

What is the ‘Spanish state’?

Many leftists in what we call “Spain” use the term “Spanish state” to describe it. Nor would they call all of its citizens “Spanish.” Distinct peoples inhabit more or less distinct regions and speak different languages than the dominant Spanish language. They don’t all identify as Spanish.

They might instead identify as Galician, Basque or Catalan, among others. Galicia is a poor region in the northwest, identified with agriculture and fishing. The Basque Country in the northeast is more industrial, with a long history of armed struggle for independence and many political prisoners behind bars in the Spanish state. Catalan is a prosperous region on the eastern shore, known among other things for its strong workers’ and anarchist movement, which was on the republican side against the fascists during the 1936-39 civil war.

Beside slaughtering the workers’ movement, the 40-year fascist Franco regime that won the civil war forced Spanish nationality and language onto everyone. That included suppressing regional languages and not teaching them in schools.

As the fascist period drew to a close after Francisco Franco’s death in 1975, the agreement for the new regime was called the “Transition.” Revolutionaries considered the Transition a rotten deal that imposed a king on all the peoples, instead of the republic they wanted. It also allowed the fascist criminals and the wealthy oligarchs to maintain their position and wealth.

So the Spanish state — the Civil Guard, the national police, the army — is identified with the fascist era, the repression of the working class and of minority nationalities, and the continuation of this rule and the monarchy under the Transition from 1978 to today.

Reaction today across the territory

Pro-independence Catalan parties — mainly pro-capitalist parties — are leading the regional government in Catalan. They pushed for the referendum. Others doubt these parties are really prepared to struggle for independence; they suspect the parties just want a bigger cut of exploited wealth for the Catalan ruling class.

There is nothing progressive about the Spanish state. On the international arena, it plays a completely reactionary role in Latin America, using its economic and cultural contacts in tandem with U.S. imperialism. It regularly attacks Venezuela and Cuba at international forums. In 2003 it joined the U.S.-British invasion of Iraq, at that time led by People’s Party Prime Minister José María Aznar.

So far the European Union has supported the central Spanish regime against an independent Catalan.

On the other hand, nominal independence does not in itself mean a victory for working-class demands. These demands are for an end to austerity, guaranteed full employment, reinstatement of public medical care, etc., along with an end to the monarchy and reinstatement of the republic.

All pro-independence organizational statements that reached Workers World from much poorer Galicia and the more repressed Basque Country support Catalan self-determination. Of course they also attack Rajoy for police repression.

For revolutionary working-class organizations, the key issue is how to build solidarity among the working class of all the peoples of the Spanish state.

Demonstrations were held Oct. 1 in at least 11 cities of the Spanish state, among many different peoples, to say, “Catalan is not alone.”

At the one in Madrid, Ángeles Maestro of the Red Network thanked Catalans: “[B]ecause what is happening today in Catalan affects us all and impacts directly all the peoples who dwell within the boundaries of the Spanish state. Because what is happening in the streets of Catalan is a crude replica of the farce of a transition that we have experienced here the last 40 years. It’s not that the transition regime made itself illegitimate today; it was always so. Only its DNA is so profoundly reactionary that today it shows big time.”