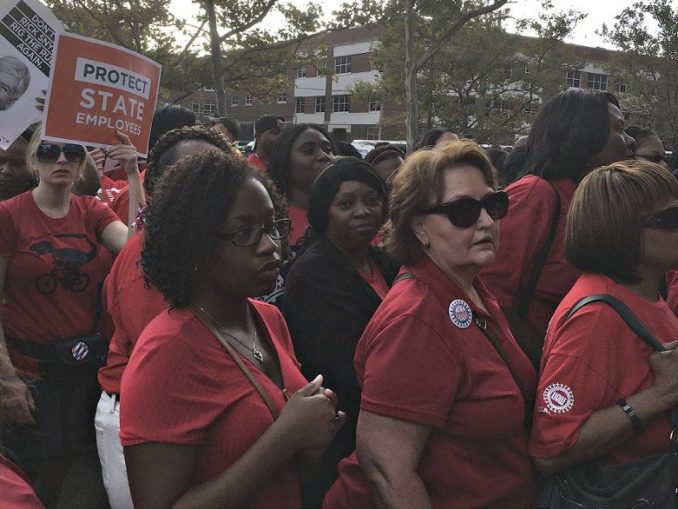 Lansing, Mich. — The scene was a sea of red outside the Capitol Commons building in Lansing, Mich., on Sept. 20. Wearing red for “Solidarity Wednesday,” members of United Auto Workers Local 6000 — the largest state worker union in Michigan — and other unions demonstrated outside a hearing of the Civil Service Commission. Inside, the hearing room was packed by workers angry about proposed rule changes that would impact collective bargaining rights when their contracts expire.

State law allows the unelected commissioners, appointed by governors, to set limits on what state workers are allowed to bargain for in contract negotiations. The new rules, approved by three of the four commissioners in a vote held immediately after the hearing, include gutting seniority protections and changing how overtime is assigned.

“Seniority is used in union contracts to promote fairness and efficiency. It is used as a way of avoiding individualized determinations that may say that they’re based on performance but may be based on other issues such as the kinds of nepotism, cronyism and political considerations that the Civil Service Commission was designed to protect against,” Ava Rose Barbour, associate general counsel for the UAW, explained. Unions fear the new rules will restore the old regime of nepotism and favoritism.

EMUFT President Daric Thorne believes the open bargaining strategy was what secured the win. “We had members coming out to meetings all summer long, but we had a critical amount of people show up in early August, both members and people from the community and from other unions.” Solidarity rallies drew many student supporters. Feeling the heat from the rank and file and their labor, student and community allies, management backed down.

The union includes veteran instructors who have taught at EMU for as long as 20 years. Without the new agreement, “they could fire us at almost any moment and they didn’t have to hire us back,” according to Thorne. (aft.org)