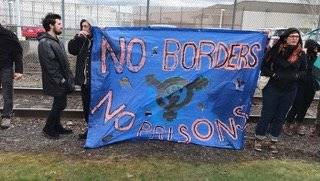 After years of immigrant prisoners’ protests and hunger strikes, Washington state is finally demanding that the Geo Group, operator of the Northwest Detention Center for immigrants, pay its prisoners the minimum wage. Attorney General Bob Ferguson filed a lawsuit Sept. 20 in state court against Geo, which pays prisoners only $1 a day — and sometimes just chips and candy. The Geo Group operates 140 prisons in the U.S. and had revenues of more than $2 billion in 2016, according to the Sept. 21 Seattle Times.

The government and corporate institution of slave labor in prisons is an issue for the 2.3 million prisoners in this country as well as the millions of former prisoners who worked under slave-labor conditions in the past.

Prisoners in the NWDC have launched a series of hunger strikes since 2014. Since the beginning of this year, hunger strikes have been almost continuous. Most prisoners are there for only immigration infractions, yet their imprisonment can lead to deportation.

Protesting Geo’s $1-per-day minimum wage is one of the prisoners’ main issues, along with inadequate food, poor medical care and mistreatment by the guards.

Ferguson was backed up at his press conference by Jorge Baron of the Northwest Immigrant Rights Project, who spoke about prisoners’ issues. The Northwest Detention Center Resistance and other allies have also expressed community solidarity with the prisoners’ demands. Different organizations protest at the prison practically every weekend.

Prisoners do all the real work at the center: preparing meals and laundry and cleaning all the rooms. Ferguson’s office said Geo’s contract with the federal government requires it to follow state and local laws. These include the state minimum wage, which has risen from $7.35 to $11 an hour since 2005.

The just demand for the minimum wage for prisoners is an opportunity for all labor to show solidarity with immigrant labor.