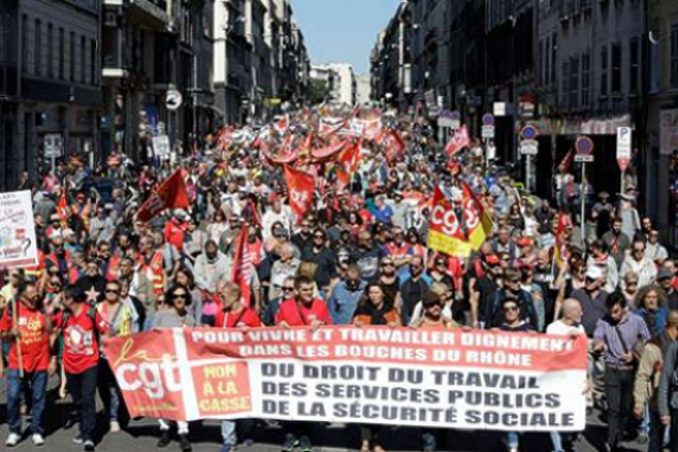 In September, three major protests have taken place against President Emmanuel Macron, whose party, Forward the Republic (LREM), is trying to abolish protections that French workers have won over decades of struggle.

All the major unions representing truck drivers, even those who had not participated organizationally in earlier demonstrations, have called for an unlimited national strike starting Sept. 25. The action will include blockading fuel depots. Such a strike has the potential of bringing France’s economy to a halt.

Before the protests began, Macron issued a statement from Athens, where he was on an official visit, claiming that “the protesters are lazy slackers who don’t want to build the French economy.” He indicated that the government would not be swayed by protests, since “democracy is not made in the streets.”

Over 500,000 French workers struck and came out into the streets in over 400 cities and communities on Sept. 12 to demand a labor code that recognizes “their right for social justice and progress,” according to the General Confederation of Workers (CGT), the union which called the protest.

The CGT is the oldest large union confederation in France with millions of members in all sectors of the French economy. The Sept. 12 call was also supported by the smaller union confederations, Solidaires and the United Federation of Trade Unions (FSU).

Two other major French labor confederations, Workers Force (FO) and the French Confederation of Democratic Labor (CFDT), abstained from organizationally participating in these demonstrations, although they do not support the new labor law the government is imposing.

Many members of the prior-mentioned unions did participate — especially members of FO, which has a militant history and has worked closely with the CGT. Entire FO locals and sub-confederations like the metal workers openly marched with the CGT and called on the FO executive council to endorse the struggle.

‘Our power versus theirs’

The right-wing press in France characterized the CGT protests on Sept. 12 as a failure because they brought out only 500,000 workers, not enough to cause the government to back down. These media emphasized the disunity among the unions and ignored the joint actions in the streets.

The protests on Sept. 21 and Sept. 22 were smaller, with only 200 declared strikes and tens of thousands of workers, youth and retirees out in the streets. The CGT felt that these actions helped keep pressure on the government and morale up among the militants.

The day after Macron signed executive orders putting a new labor law in place, FI, the political party led by Jean-Luc Mélenchon, brought about 150,000 people out in Paris to protest the law. FI, which received nearly 20 percent of the vote in the presidential elections this year, had as its main slogan that the new labor law was a “social coup d’état.”

Some major left-wing parties, like the New Anti-capitalist Party (NPA) and the French Communist Party (PCF), sent delegations to the FI protest but were critical of the FI’s attempt to recruit centrist and right-wing parties to the coalition against the new labor law. (L’Humanité, Sept. 22)

Even though the new labor law is going into effect, the struggle against it is certainly going to continue. As a construction worker told L’Humanité on Sept. 12, “If the law isn’t on our side, then it becomes a matter of our power versus theirs.”