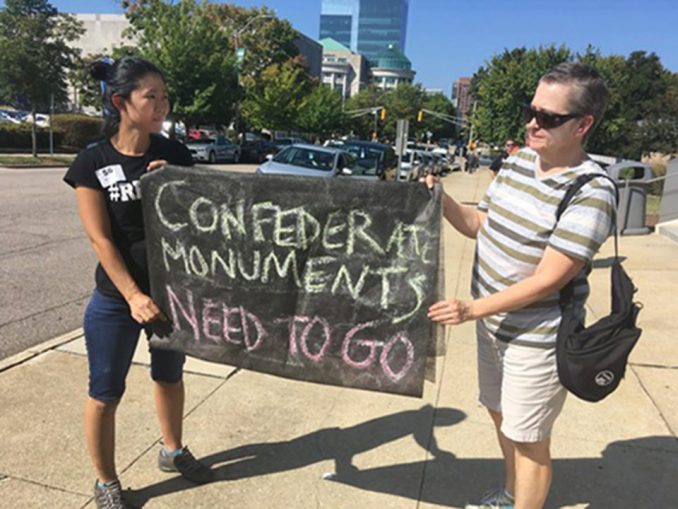 Continuing the righteous struggle to take down monuments to racism and white supremacy, some 50 protesters rallied at a Sept. 22 meeting of the North Carolina Historical Commission in Raleigh, N.C. Among the agenda items was a proposal by Gov. Roy Cooper to remove Confederate monuments from the State Capitol in Raleigh.

Protesters wore hats and T-shirts with the slogan “Do It Like Durham,” referring to the toppling of a Confederate statue at the Durham County Courthouse on Aug. 14. The activists held a rally both before and after the hearing and sat in for the packed meeting, which was moved from the commission’s usual small meeting room to an auditorium in the State Archives.

When commission member Sam Dixon suggested that one concern was that the statues may be harmed or defaced, many people in the audience snickered loudly.

Several of the arrestees from the Aug. 14 action participated. Raul Jimenez said, “These statues have been in place for a long time representing hate, representing racism, representing the fact that the South fought for slavery, to keep slavery.” (wral.com, Sept. 22)

Shortly after activists toppled the statue in Durham on Aug. 14, Cooper proposed to move three monuments from the Capitol grounds to the historic site of a Confederate battlefield some 50 miles south of Raleigh.

Dodging the issue, the commission voted at the Sept. 22 meeting to delay any decision on moving the monuments until April 2018, after a panel could be formed to study the “ramifications” of moving the statues.

In 2015, then-Gov. Pat McCrory signed a “Historic Artifact Management and Patriotism Act” after approval by the state’s General Assembly. The law dictates that “objects of remembrance” such as Confederate statues may only be relocated “when appropriate measures are required by the State” to preserve them or in relation to construction needs.

Moreover, the law states that monuments can only be moved to a location in which they will be afforded the same “prominence, honor, visibility, availability and access” as the previous location. The 11-member Historical Commission has sole discretion in the matter.

Regardless of the state’s maneuvering, WWP member Dante Strobino said, “We’re going to keep organizing until these statues come down, and they’re going to come down by any means necessary.” (newsobserver.com, Sept. 22)