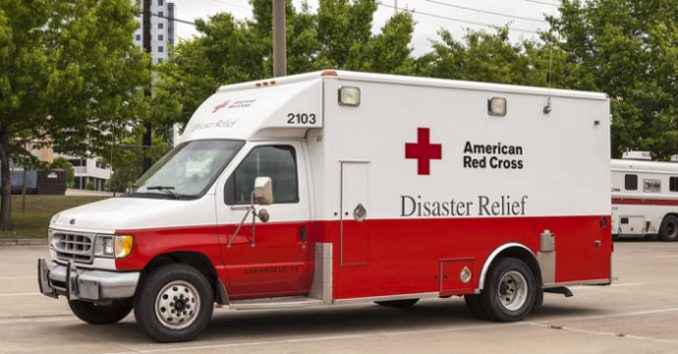 Red Cross promises are empty, as is this truck.

Over mainstream and social media, the American Red Cross is generating an avalanche of fundraising commercials for donations for both the victims of Hurricane Harvey in Houston as well as for Hurricane Irma in Florida. A host of well-heeled celebrities, including former President Barack Obama, have called on the public to empty their wallets and donate to this massive “nonprofit” charity.

As of Sept. 14, the Red Cross had raised more than $300 million in donations for hurricane relief from both storms. (WRAL.com, Sept. 14) Of course, some of the money is tax-deductible donations from such corporations as Chase, ExxonMobil and Dow Chemical, as well as wealthy individuals. But much of it comes from individual donations by concerned workers.

The Red Cross bonanza has raised skeptical voices even from such capitalist mouthpieces as the New York Times, whose Aug. 30 editorial called the Red Cross a “master of promotion” in management of funds. The Times cited “media reports documenting the Red Cross’s disaster relief failures — including after the Sept. 11, 2001, terrorist attacks, Hurricane Katrina, Hurricane Sandy and the Haiti earthquake.”

A blistering 2015 report from ProPublica and National Public Radio documented the criminal relief failure of the ARC after it raised nearly half a billion dollars for the terrible Haiti earthquake that killed up to 316,000 people, injured 300,000 and displaced 1.5 million people from their homes. (cnn.com, Dec. 28)

“The Red Cross says it has provided homes to more than 130,000 people. But the actual number of permanent homes the group has built in all of Haiti: six,” reported ProPublica. “The Red Cross kept soliciting money well after it had enough for the emergency relief. … Doctors Without Borders, in contrast, stopped fundraising off the earthquake after it decided it had enough money. The donations to the Red Cross helped the group erase its more than $100 million deficit.” (propublica.com, June 15, 2015)

A 2014 article from ProPublica and NPR stated: “The Red Cross botched key elements of its mission after [the 2012 hurricanes] Sandy and Isaac, leaving behind a trail of unmet needs and acrimony. … Red Cross officials at national headquarters in Washington, D.C., compounded the charity’s inability to provide relief by ‘diverting assets for public relations purposes,’ as one internal report puts it. Distribution of relief supplies, the report said, was ‘politically driven.’” (propublica.com, Oct. 29, 2014)

The expose continued: “During Isaac, Red Cross supervisors ordered dozens of trucks usually deployed to deliver aid, to be driven around nearly empty instead, ‘just to be seen,’ one of the drivers, Jim Dunham, recalls. ‘We were sent way down on the Gulf with nothing to give,’ Dunham says. The Red Cross’s relief effort was ‘worse than the storm.’”

When Hurricane Isaac struck Louisiana and Mississippi, 90 percent of Red Cross workers assigned, some 460 volunteers, were kept for days in non-affected Tampa, where the Republican National Convention was being held.

When Hurricane Sandy struck the East Coast in 2012, the Red Cross raised some $312 million to fund relief. “But while its fundraising was torrential, its disaster response was a trickle,” the 2014 ProPublica article states. Instead, public relations was its priority, with multiple officials complaining that relief vehicles and key relief workers were tied up at press conferences, while neighborhoods along the beaches, like the Rockaways, couldn’t get food and drinkable water.

A senior Red Cross official recalled that “an emergency response vehicle was dispatched to an early December photo-op with supermodel Heidi Klum to tour affected areas with Red Cross supplies: ‘Did you know it takes a Victoria’s Secret model five hours to unload one box off a truck?’ the official said. ‘I was so mad.’”

The American Red Cross is a huge nonprofit corporation employing 26,000 workers, with nearly $3.5 billion in assets. (redcross.org, June 30, 2015) Its CEO, Gail McGovern, hired after the huge scandal about Red Cross operations around Hurricane Katrina, came from AT&T, as did several other executives. She makes more than $500,000 a year.

More than 9 percent of Red Cross donations are spent on “non-relief” items, such as publicity campaigns — a higher proportion than many other charities.

It should be the government’s responsibility, not only to prepare and protect communities from impending natural disasters, but also to fund and coordinate relief efforts.

But the capitalist-run government does not prioritize the needs of disaster-struck people, who then must turn for hope to huge “nonprofit” corporations like the American Red Cross. These “relief operations” should be under the control of the communities and the workers who are in need, not executives from Wall Street.