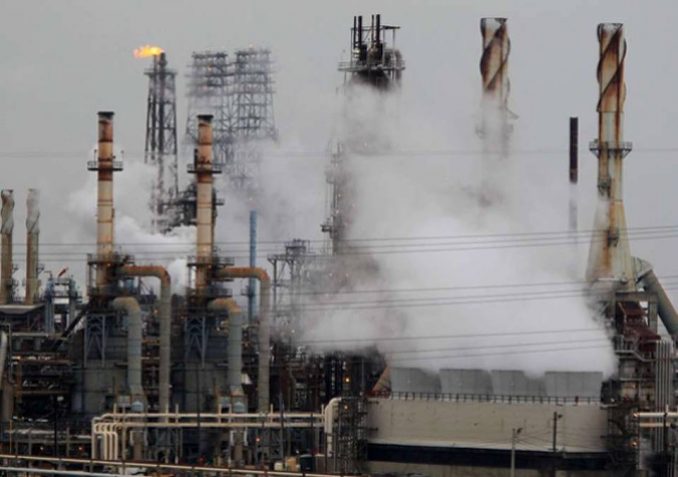 More than just torrential rains and flooding from Hurricane Harvey have put Houston in the spotlight. The fourth-largest city in the U.S., Houston has neighboring areas that contain more than a dozen oil refineries. In Baytown, 25 miles away, ExxonMobil operates the country’s second-largest refinery.

Ninety miles east of Houston, in Port Arthur, Texas, is the Saudi Arabian-owned Motiva Enterprise refinery, the largest such facility in the U.S. ExxonMobil operates another refinery there.

What these oil refineries have in common is that they spew millions of pounds of toxic pollutants and fumes into the air, in violation of the Clean Air Act and endangering the surrounding communities. ExxonMobil has flagrantly violated permits to expand its oil processing and refinery operations.

Port Arthur is home to the largest population of disadvantaged and marginalized people living in fence-line communities surrounded by refineries. Disproportionate numbers of these people suffer under a daily bombardment of toxic fumes. They do not have the resources to leave or evacuate.

Communities adjacent to these petrochemical plants have one thing in common: They are occupied by predominantly poor, marginalized, Black and Latinx residents who are daily exposed to airborne toxic emissions. These carcinogens cause serious health problems, including an increased mortality risk from heart disease and cancer, as well as respiratory and neurological illnesses and birth defects.

Alleen Brown’s article in the Aug. 31 Intercept, entitled, “Harvey Victims Face Toxic Pollution as Hurricane Recovery Begins,” tells of a study last October by the Union of Concerned Scientists and Texas Environmental Justice Advocacy Services. It showed vast health disparities between the Black and Brown lower-income communities of Harrisburg-Manchester and Galena Park, which sit near Houston’s petrochemical industry, and the two mainly white communities of Bellaire and White Oaks/Eldridge further away.

The study concluded that the fence-line communities “faced cancer risks and a respiratory hazard index that were at least 24 percent higher risk than the wealthier communities,” showing the greater environmental harm done to people of color.

‘Harvey: a catastrophe waiting to happen’

Dr. Robert Bullard, distinguished professor at Texas Southern University in Houston, is known as the “father of the environmental justice movement.” He told Democracy Now! on Aug. 29 that “unrestrained capitalism made Harvey a catastrophe waiting to happen.” He stressed that throughout the U.S., zip codes and institutional racism against oppressed communities are the best predictors of health and well-being. Environmental vulnerability has a historical color.

The placement of these large industries often dramatically lowers the property value of homes in these communities. Being unable to sell their homes at a value high enough to purchase property elsewhere often prevents residents from relocating.

Bullard explains that due to redlining practices, Black and Latinx people can’t get loans or insurance in fence-lined communities. Redlining occurs when banks, corporations and the government racially profile certain communities, and then banks discourage investment there by identifying certain areas as high-risk. So redlining geographical areas results in disinvestment and discrimination occurs despite laws against it.

In Louisiana, Baton Rouge and Norco are fence-line communities of Shell Oil. Hurricane Katrina in 2005 severely affected lower-income Black residents who lived in New Orleans’ neglected Ninth Ward. The government abandoned residents for days. Nearly 2,000 people died. Some residents were sent to Houston, where they were displaced again due to Hurricane Harvey. Studies show that Black people are less likely to return to their cities after displacement.

The Bronx in New York City is among the poorest and most oppressed counties in the U.S. More than one-fourth of its Black and Latinx residents live below the poverty line. For five decades, the Bronx has been denied equal access to resources due to institutional racist policies and practices, including redlining.

Massive expressways built straight through the community have caused the forced relocation of hundreds of thousands of low-income people and increased auto and truck emissions. An overabundance of factories, waste treatment plants, municipal landfills and incinerators developed, to the detriment of residents’ lives and futures. Pollution by air, water and waste severely damage Bronx residents’ health; extremely high rates of asthma prevail.

As Houston recovers from Hurricane Harvey, the question arises of whose community will be restored and rebuilt. In the rebuilding projects, environmental and economic justice must be built in, free of inequity. Will oppressed communities still be neglected and invisible, while oil corporations and banks capitalize on their suffering and destruction? Will they receive the protection of rebuilt infrastructure?

The Environmental Protection Agency has dragged its feet for years on complaints and civil rights lawsuits, and has given waivers to oil companies. ExxonMobil, for instance, greatly influences government policies.

In March, the Trump administration declared it would roll back pollution protection. It proposed cutting back funding and reducing EPA staff, eliminating money for environmental justice programs and deregulating protections against toxic pollution.