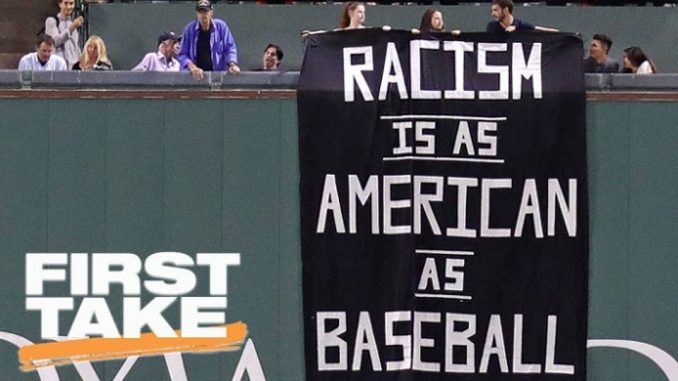 During a Sept. 13 Major Baseball League game between the Boston Red Sox and Oakland Athletics, four white anti-racists hung a huge banner from the stands that read: “Racism is as American as baseball.” A fifth activist provided videotape of the action. The banner received both national and international attention. Fenway Park, home to the Red Sox, recently made major headlines when racist fans hurled racist epithets in May at Adam Jones, an African-American outfielder with the visiting Baltimore Orioles. Other Black players stated that they experienced similar racism at Fenway. The Red Sox were the last team to integrate their roster in 1959.

The activists stated that the incident with Jones was prime motivation for carrying out this heroic action. After they were taken out of the stadium, the activists issued the following statement to the Washington Post: “We are a group of white anti-racist protesters. We want to remind everyone that just as baseball is fundamental to [U.S.] American culture and history, so too is racism. White people need to wake up to this reality before white supremacy can truly be dismantled. We urge anyone who is interested in learning more or taking action to contact their local racial justice organization.”

One of the protesters added, “We are responding to a long history of racism and white supremacy in the United States that continues to pervade every aspect of [U.S.] American culture today. We deliberately chose a platform in an attempt to reach as many people as possible.” (Sept. 14)