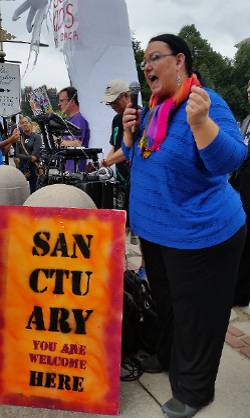 Hundreds rallied at the Massachusetts State House on Sept. 16 to protest President Trump’s decision to end the DACA (Deferred Action for Childhood Arrivals) policy for young immigrants known as “Dreamers.”

Mahtowin Munro of the United American Indians of New England opened up the rally by reminding the protesters that they were standing on Indigenous land, stolen by racist settlers who imposed false borders. “We will defend the 11 million undocumented workers here and together beat back the attacks by Trump and all the settlers,” she said.

Other speakers included Andre François, president of the Boston School Bus Drivers, Steelworkers Local 8751, who represent 1,200 drivers and monitors. Some 900 are Haitians or Haitian Americans. Many of these workers have Temporary Protected Status. François said the union is demanding their immigration status be made permanent.

Members of the Massachusetts Teachers Association, Boston University Medical School students, and Dreamers from all over the state then made up an ebullient crowd that marched through the busy downtown shopping area. Chants like “No hatred! No fear! Immigrants are welcome here!” seemed to uplift the shoppers, workers and families. Many stopped to cheer, join in chants, raise fists, and film and photograph the demonstration.