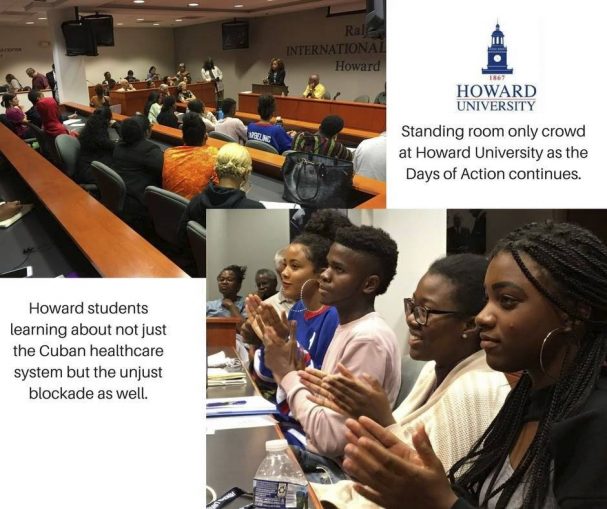 Washington, D.C. — Cuba’s health outcomes in life expectancy and low infant mortality exceed those in the U.S. — at far less cost. So when the International Committee for Peace, Justice and Dignity hosted its “Third Days of Action” to end the blockade of Cuba, it got a warm response from students, community, U.S. medical professionals and even some elected officials in Washington, D.C.

This mirrored opinion polls that show the majority of the U.S. population, including Cuban Americans, support U.S. actions to normalize relations.

The Days of Action concluded on Sept. 16 at the Miller Branch Library in Ellicott City, Md. After the viewing of “Dare to Dream,” a new video about U.S. graduates from Cuba’s Latin American School of Medicine (ELAM), the program featured three guests from Cuba: Dr. Jesus Reno Cespedes, head of pediatric oncology in Havana; Yoandrys Ruiz Villalon, secretary of the Union of Young Communists from Camaguey Province; and Leima Martinez, from the North American Department of Cuba’s Insitute of Friendship with the Peoples. Also speaking was one of five U.S. graduates of ELAM.

Before that, during a Sept. 14 congressional briefing with the three Cubans, Congressperson Barbara Lee interrupted Dr. Reno as he described how medicine and spare parts for medical devices are difficult or impossible for Cuba to buy anywhere, preventing it from adhering to international “best practice” treatments. Lee said, “I am so disturbed by this. … In 2000 the rules changed to allow importation of medicines. … Does Treasury still technically allow the sale of medicine?”

Dr. Reno replied that there are 68 medications that cannot be bought by Cuba. International pharmaceutical suppliers purchased by U.S. companies are not willing to risk financial transactions with Cuba because of the U.S. blockade.

A superficial illusion that the blockade has ended was created when the Obama administration eased travel restrictions. Obama traveled to Cuba with his family in 2016, and the U.S. government then allowed direct flights from U.S. airports. But this June 16, a-dog-and-pony show in Miami featured the current president signing an executive order retightening travel and other restrictions against Cuba. It demonstrated the need to erase completely, once and for all, the web of laws that form the blockade.

Back in 1960, right after the Cuban Revolution, a U.S. State Department document, known as the Mallory-Rubottom memo, admitted that the majority of Cubans supported the revolution. But it proposed that “every possible means should be undertaken promptly to weaken the economic life of Cuba.” This should be “as adroit and inconspicuous as possible” and make “the greatest inroads in denying money and supplies to Cuba, to decrease monetary and real wages, to bring about hunger, desperation and overthrow of government.” (history.state.gov)

Though not expressed so crudely, the aim of the current economic, financial and commercial blockade of Cuba is the same.

Planning for the Days of Action began in January, as the debate about the future of health care services in the U.S. was heating up. The U.S. is the only industrialized country in the world without a national health care plan. Even in capitalist Britain and Sweden, health institutions are under pressure to privatize and services have deteriorated.

In January the focus was on repealing or saving the woefully inadequate Affordable Healthcare Act, which extended Medicaid to millions of poor, previously uninsured people. Coincidentally, this September an expanded Medicare bill was introduced, even as the Cuban socialist model for health care was being examined.

When someone at Howard University asked, “Are mental health services covered in Cuba?” Dr. Abraham Vela, graduate of ELAM, replied, “Everything is covered in Cuba’s free health care: prevention, rehabilitation … not just health. In order for you to be healthy, Cuba practices the true meaning of health. What does it mean to be healthy? It doesn’t mean curing your symptoms. Bio-psycho-social health, Cuba does all of that for its citizens.”

Video streaming for most of the events can be viewed at TheInternationalCommittee.org.