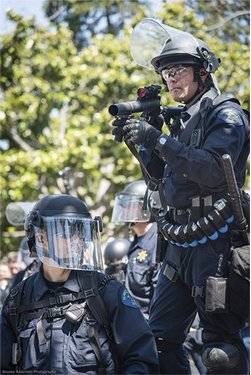 Pepper spray had been banned for use in crowd control here since 1997. The worst part was the premise for this “emergency” measure: to protect the “First Amendment rights” of white-supremacist right-wingers and Nazis, who have been holding rallies and booking speakers at the “liberal” University of California Berkeley campus since February.

In two hours of audience testimony, almost all opposed use of pepper spray. A speaker from Workers World Party pointed out that hate speech, which incites violence against Blacks, Muslims, people of color, the LGBTQIA community, disabled, Jewish, im/migrant communities and others is not protected speech at all. Many others pointed out the health dangers of pepper spray to people with asthma and other medical conditions.

In a statement published after the decision, the Anti Police-Terror Project said that it is “those of us who pose the most risk to the State and its agenda that get categorized as violent. And there is nothing in the history of the BPD that should give the people any faith that they will operate inside of the rules. One only has to remember the murder of Kayla Moore, or look at the fact that they still refuse to release the full findings of their internal audit on racial profiling.”

The APTP statement also said: “Each time the right-wing white supremacists have come to the Bay Area under the pretense of ‘free speech,’ violent acts directed at Black, Brown, LGBTQIA persons and progressive businesses with Black Lives Matter signs in their windows have been committed. People have been called racial slurs, spit on and had their windows broken. Activists have been doxxed, had their personal information spread across social media platforms — including where they live and work — received death threats, have had to move into safe houses and bring security to meetings and court dates.

“Yet none of these egregious acts of violence prompted Mayor Jesse Arreguin to attempt to classify these groups as gangs (as he [has] with Antifa) or inspired him to call for increased police aggression. Instead, the Mayor has called for increased police violence against those community members who stand up and refuse to let hate flourish in the Bay. Even the Mayor himself admittedly received thousands of death threats from these same groups he is rushing to now defend.”

The rush to defend white supremacist “free speech” comes on the heels of a successful anti-fascist weekend in the Bay Area on Aug. 26-27, when a broad coalition of organizations and people kept the Nazi alt-right groups from holding rallies in either San Francisco or Berkeley. In Berkeley, a strong contingent of Antifa helped lead the defense of that march. (See workers.org, ”Bay Area drives fascists out,” Aug. 29.)

The pepper spray proposal was deemed urgent by Berkeley Police Chief Andrew Greenwood because of planned protests against the scheduled speech of right-wing commentator Ben Shapiro at UC Berkeley’s campus on Sept.14.

Nine people were arrested during the protest against Shapiro. A couple dozen people hung signs over a walkway where ticket holders were being checked that read, “UC protects fascism, not students,” and “Trans lives matter here.” Other rallies against hate are currently scheduled for Sept. 23 and 25.

Additionally, an entire right-wing “free speech” week is scheduled at Cal on Sept. 24-27, including Milo Yiannopoulos, Breitbart editor Steve Bannon and Ann Coulter. According to dailycal.org, “132 campus faculty members from various departments have called for a complete boycott of classes and campus activities during ‘Free Speech Week.’”

African-American Studies Associate Professor Michael Cohen said: “This is a clear threat to public higher education. People are coming to humiliate others and incite violence. … The boycott is a refusal to allow this to happen on our campus.”