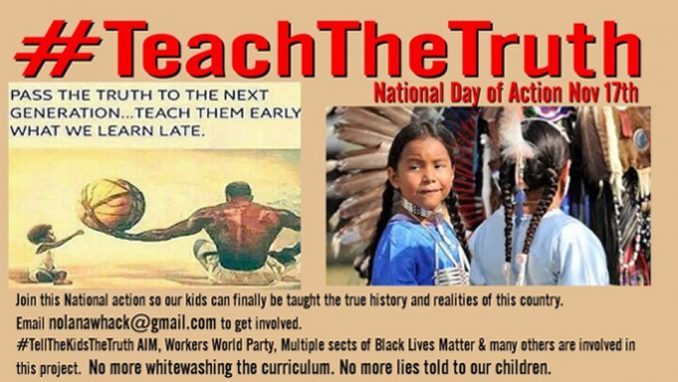 They say our kids are our future. If that is the case then why are we setting so many children up for failure by teaching them to hate themselves because they are not white? Why are we teaching them partial histories and ignoring facts as inconvenient to the colonial narrative? I grew up thinking the murderers of our people and men who owned us as slaves were heroes because that’s what I was taught.

People always say that the lack of funding in U.S. schools is the biggest problem in education; and while that is a major problem, it is not the largest issue that education in this country is facing. Subject matter is, and should be, a far larger concern than funding. The histories and lessons we choose to teach our children matter and until this country chooses to teach and impart its actual history, it will be doomed to continue its cycles of violence against people of color.

The indoctrination of “American exceptionalism” continues to be pounded into the minds of our children. “America first.” People of color last. Children are told a fairytale about U.S. history that, in some parts of the country completely omits Native history, slavery, Jim Crow and the Ku Klux Klan. It is harmful to omit these very important historical occurrences as a denial of fact.

If you’re a Black or Native child and you grow up without these facts, not only is your self-worth limited by the whitewashing of “American Exceptionalism” but you’re also likely to be left very confused the first time you’re stopped by a police officer because of your skin color or when you see a person of color murdered by the police for the same reason. It can be confusing because lacking any historical reasoning for the violence, it may look random or like something that isn’t a common occurrence.

People and groups such as Protests for Native Rights in Michigan, the American Indian Movement (Virginia/Maryland chapter), the United American Indians of New England, the Wisconsin Indian Education Association, Black Lives Matter Arizona and Black Lives Matter Vermont among others are a part of a national project that is going after the whitewashed curriculum in U.S. textbooks as well as schools that have racist nicknames, racist mascots or that are named after racist people.

A national day of action is being planned on Nov. 17, 2017, to initiate this project. This date has been chosen because “Thanksgiving” is one of the largest and most pervasive U.S. lies told to children. Genocide should not be celebrated, and yet this country has built a myth around genocide and perpetuates that myth annually.

Truth protectors will be positioned at schools across the country with signs and posters that quote factual information about each school’s problematic mascot, nickname or school name. For example, at Andrew Jackson Middle School a sign might read, “Jackson killed double the people that Hitler killed in the Holocaust/He had over 100 slaves/He created the Trail of Tears,” etc.

As the final bell rings and the children exit the schools, they can see the truth for themselves and begin to question what they have been taught. On this same day, we will begin putting pressure on textbook publishers by calling, tweeting, posting, writing and emailing; telling them to fix their guidelines for historical accuracy, their curriculum for all grade levels, and to TELL THE KIDS THE TRUTH!

After the day of action, we will keep a dialogue going with all the schools that we protested at and their districts, staying on their behind so we can force as much change as possible. The day of action will also be used as a springboard to put a full-court press attack on the textbook publishers. We are logging all the different major publishers and which states their textbooks are used in so we can have a organized attack when we go after them.

I’ve heard too many people of color say that “they haven’t experienced racism” and they may actually believe that. Because of all the fallacies they’re taught as kids, they subconsciously think that white people are better than we are; therefore, when they experience racism they don’t qualify it as racism and just think that’s just the way things are supposed to be.

I grew up in a white neighborhood. I went to a rich, white school. Subconsciously, I wanted to be white and I’m a mixed brotha. I’m half white. So my confusion and delusion was an intrusion on my daily life. Most of my friends were white and had straight or spiky hair when I was a young kid.

One day, I wet a comb to try to straighten my nappy hair and even though I tried, tried and tried, the curls would not straighten. I was very disappointed. I was about six or seven at the time. My psyche for most of my childhood made me believe white folks were better than us. Being told to believe in a fake deity (white Jesus) didn’t help. Long story short, like millions of other children I was brainwashed into believing Chris Rock’s famous comedy line: “If it’s all white, it’s all right.”

It wasn’t until I was about 14 when I read “The Autobiography of Malcolm X” and watched Denzel [Washington] play him in the movie did I first feel proud of my Black self and my Blackness. Keep in mind that before doing so, I thought Malcolm was a no good thug because of what I was taught in school.

Unless we change what is being taught to our children, they will continue to grow up to be very confused adults ashamed of their wonderful heritage and people. There is another side to this. White children are taught that genocidal and racist murderers of the past are heroes and their extremely dirty deeds are left out of the curriculum. White kids grow up with a sense of superiority. They end up believing that all these white leaders of the past and present are people who should be respected, while the true facts of how this country was formed and is maintained are left out of the textbooks.

When you’re told that Black people willingly immigrated to the U.S. and all the Native people died out due to unfortunate diseases, while powerful white leaders “built this great country,” you’re going to feel pretty good about yourself and the race you’re a part of. White power/white supremacy = “American exceptionalism.” This is how people like Barry Goldwater, Lyndon Baines Johnson, Donald Trump and Hillary Clinton are created. They are created by conditioning and indoctrination by being taught a whitewashed version of U.S. history.

We already have over 40 schools we’re going to protest at on Nov. 17. We want this stopped. We don’t want this to continue. We want to #TellTheKidsTheTruth. This genocidal system we are under needs to go, but that can’t happen unless the truth is told. If our kids really are our future we need to act like it. It doesn’t matter where you are in the United States. You can help this endeavor. If you would like to do so, email [email protected]

We’re trying to add as many cities as possible for the day of action. We need people to organize in their area. We have a list of thousands of schools named after racist people and having racist nicknames and mascots. You can choose from a school on the list in your area to organize at.​ We also need people to help with the other half of this project in going after the curriculum. We need folks who can add to our efforts of coordinating calculated pressure on the publishers, starting on the day of action and moving forward.  You can even help us fix the toxic curriculum from your own home.

I’m 29 years old. I remember the Rev. Dr. Martin Luther King’s words: “Free at last …” I want more than anything in this world for us to be free before I pass on, and I truly believe this project would be a giant step forward towards our freedom.

Peace and Love. All Power to the People!