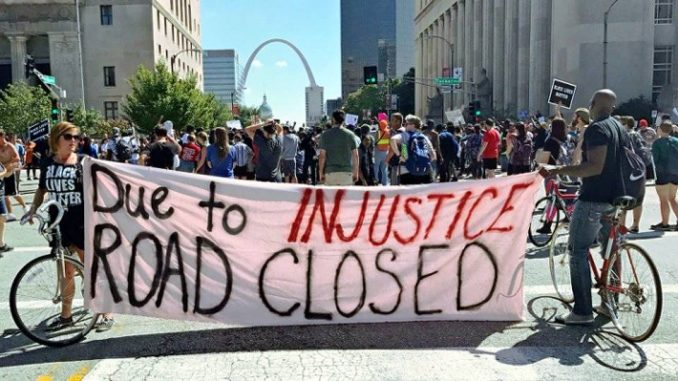 Furious and frustrated, people in St. Louis have been taking to the streets since a Sept. 15 not-guilty verdict acquitting a white ex-cop for the 2011 killing of a young Black man, Anthony Lamar Smith. By Tuesday morning, Sept. 19, more than 120 people had been arrested during four days of demonstrations. Organizers foresaw more protests.

Cop Jason Stockley had been charged with first-degree murder and armed criminal action for shooting 24-year-old Smith five times under highly suspect circumstances. The charge carried a sentence of life in prison without parole. Probably doubtful that St. Louis residents would find in his favor, Stockley had waived his right to a jury trial, leaving the ruling up to Circuit Judge Timothy Wilson.

Prosecutors called the judge’s acquittal of Stockley appalling, given the extent of damning evidence against him. They said Stockley was out of control during a three-mile car chase at over 80 miles an hour, and that he shot Smith without provocation. Audio evidence from the dashcam video in Stockley’s car captured him telling his partner, “We’re killing this m*****f***er don’t you know it.” In less than a minute, he shot Smith five times.

Stockley is believed to have planted a gun in Smith’s car. The gun was covered with Stockley’s DNA but none of Smith’s. Moments after the shooting, Stockley was shown on video rummaging through a bag in the back of his police vehicle and returning to reach into Smith’s car.

In 2013 Stockley resigned and the St. Louis Police Department paid Smith’s family a $900,000 settlement. In 2016 the FBI and the SLPD turned over new evidence to prosecutors, generating this year’s charges. But, once again, with the judge’s ruling, a killer cop walked free.

After Stockley’s acquittal on Sept. 15, protesters marched through St. Louis blocking highways. They surrounded Mayor Lyda Krewson’s house, throwing red paint and rocks that broke two windows, and marched to a police precinct, where they blocked a bus full of riot cops and smashed the windshield of a cop car. Five cops were taken to the hospital.

As police used tear gas and shot rubber bullets, a St. Louis synagogue, the Central Reform Congregation, opened its doors to about 250 protesters to protect them from police. Rabbi Susan Talve of the CRJC stressed: “Black and Brown bodies are on the line every day just because of the color of their skin. I have to be out there putting my body on the line so that another mother doesn’t lose another child.” (Jerusalem Post, Sept. 18)

White supremacist and fascist groups responded to this act of solidarity by calling on cops to invade and gas both Black people and Jews in the synagogue. One anti-Semitic tweet, which went viral, was “#GastheSynagogue.”

Protests continued on Sept. 16 as demonstrators went to malls in mainly white suburbs shouting “Black Lives Matter” and “Cops and jails, the whole damn system is going to fail.” One sign read, “White silence is violence.”

In an upscale suburb, the Delmar Loop area of University City, protesters demanded that the police resign. They called for an economic boycott of St. Louis, chanting, “If you kill our kids, we’ll kill your economy!” Protesters also marched through shopping malls in a wealthy St. Louis County area. (St. Louis ­Post-Dispatch, Sept. 17)

Hundreds of cops in riot gear poured into protest areas and became more violent against demonstrators because they supposedly “refused to disperse.” However, protesters said cops corralled, or “kettled,” them, so they could not leave, and then attacked.

This was confirmed by St. Louis Post-Dispatch reporter Mike Faulk, caught in the kettling, who was knocked down by multiple police, kicked in the head, pepper-sprayed and “subdued.” (Chicago Tribune, Sept. 19) One video shows a swarm of cops in heavy armor attacking an elderly woman. They shove her to the ground, walk over her, then force her into handcuffs with no attention to her injuries. (Fox2News)

Mayor Krewson issued a statement Sept. 19 denouncing “destructive” protesters, but former St. Louis Comptroller Vivus Jones responded within two hours in a Facebook post: “Most of the destruction in North Saint Louis was government-sanctioned and promoted. N. StL poverty is 50% in zip codes.”

The cops mocked protesters Sunday night by co-opting a movement slogan, chanting, “Whose streets, our streets,” while battling the crowd. Police Chief Lawrence O’Toole boasted: “I’m proud to tell you the city of St. Louis is safe and the police owned tonight.” (Washington Post, Sept. 18)

But on-the-ground Facebook reports documented the extreme lack of safety for those at the mercy of military-level police violence. The cop chant was a near-fascistic assertion that state control is in direct contradiction to justice for oppressed and poor people.

Teresa Montgomery commented that the mayor should see “my video of being threatened with arrest for standing on a sidewalk.” Leigh Maibes wrote: “I have video of the cops using horrendous force on nonviolent observers. Not to mention they Tased other journalists this evening.”

Megan Elllyia-Green posted a video of “people maced while sitting cuffed on the ground. Journalists and legal observers arrested.” Buzz Hirsch exclaimed: “The cops and police commissioner O’Toole have just escalated the war and given ordinary folk a new reason to protest. Surrounding and arresting, then handcuffing, beating and macing.”

Koach Baruch Frazier recorded hours of video, posted on Facebook, to document his statement: “[The attack] goes down the same way every time. They block you in, and they wrangle you so you have no way to go, and they attack. The narrative that we are doing something wrong that encourages violence against us is utterly ridiculous and untrue. These people hate our innards, they hate us because we are Black, and they bring all their fucking police to kill us.”

The Stockley verdict evokes the 2014 acquittal of the racist cop who killed unarmed 18-year-old Michael Brown in nearby Ferguson. That ruling sparked months of angry protests. Michael Brown’s father responded to Smith’s killing by saying: “My people are tired of this.” (New York Times, Sept. 17)