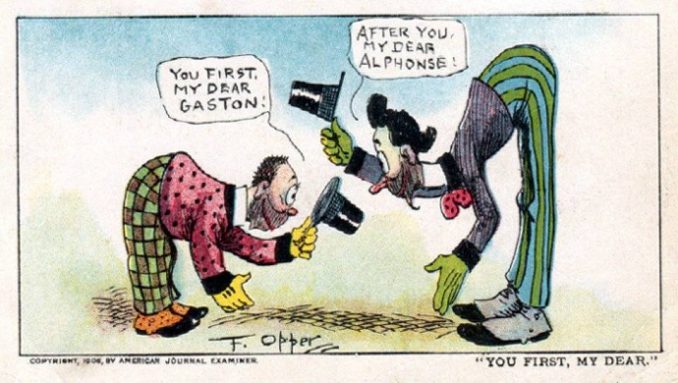 This guest article was published as Berlin Bulletin No. 133, Sept. 12, 2017. Grossman left the U.S. military during the U.S. war on Korea to live in the German Democratic Republic during its existence and has lived in Berlin since.

Not even the stubbornest nonvoters can ignore the coming election day in Germany, as always on a Sunday, Sept. 24. For just one month before voting booths open, lantern poles may be decorated with political posters, two, three, even four to a pole, tied on with wire, with a race to get the best spots. Most posters offer copious color and little substance, but with 34 parties, some state or local but most of them national, every stroll offers a wide choice of handsome, smiling candidate photos and bold clichés.

Bigger parties that can afford them also set up wordier billboards, usually at crossings where cars waiting for a green light can read their many promises.

There are no political ads on TV, but lots of interviews, talk shows and analyses. For weeks, a major ballyhoo effort promoted a “TV duel” between Chancellor Angela Merkel, running for re-election, and top Social Democratic Party (SPD) candidate Martin Schulz. As she insisted (and she was in a position to insist: ”Otherwise I won’t take part!”), it would be their only confrontation and would last 90 minutes, with no audience participation but questions by moderators from the four biggest channels.

Schulz enjoyed an upwards swoop when he became new party leader in February but his and his party’s star sagged back to almost 15 points behind Merkel’s CDU (with its Bavarian sister party, the CSU). This duel gave him a chance to close the gap, and aggressive attacks and counterattacks were expected.

What happened was less a duel than a duet! I recalled old U.S. comics characters, two Frenchman so polite, with “After you, my dear Alphonse” and “No, you first, my dear Gaston!” that every open door proved an obstacle. Merkel and Schulz were almost equally courteous and friendly. For me (and many others who stuck it out) the only fight that evening was to keep our eyes open!

After all, their parties have cohabited in a coalition government since 2005. As with so many couples, there were disagreements, even minor quarrels, but their vows remained unviolated.

About two-thirds of their TV time was spent talking about refugees and immigrants, with both trying to sound very humanitarian while tightening enough screws to keep anti-foreigner voters on board. Then they turned to relations with Turkey, promising to get tough with Erdogan for arresting German citizens, but aware that he can always hit back by reopening Aegean Sea routes for hundreds of thousands of Syrians and others risking flight to  Europe — and if possible Germany. But here too, and on “getting tough with foreign terrorists,” the two spoke as with one voice — and hardly raised theirs.

Despite polite CDU-SPD manners, the media still do their best to play up a two-party boxing match. But what about the other parties? Most are very small, like the German Communist Party, which decided (after much dispute) not to support LINKE candidates this year but rather to field its own. There are also a tiny Maoist party and a Trotskyist party, a pensioners’ party, animal and climate protection parties, a hip-hop, a vegan and a “garden” party, and one featuring only satirical jokes. One small party is run by the spouse of Lyndon Larouche, for years a fishy right/left candidate in the USA.

It’s easy to get on the ballot, but to get Bundestag seats a party must win constituencies directly or achieve 5 percent of the total vote — goals now possible for only four other parties.

One, the Free Democratic Party (FDP), whose main goal is to protect the prosperous, would most likely be Merkel’s favorite to help her strong CDU (now at almost 40 percent) set up a new government. Then she would no longer have to stay — or sound — moderate enough to satisfy Social Democrats fearful of losing more working-class voters and ties with most union leaders (like the U.S. Democratic Party). FDP posters boldly show its leader in casual wear and a five-day beard, praising “Schoolbook satchels not legal briefcases” or warning that “the time has come, Germany.” Figure it out!

The Greens, different from any in the USA, are no longer the leftist party they once seemed to be. They still stress ecology, women’s equality and LGBT rights, but as their membership grows older and more prosperous, often in the professions or civil service, they grow increasingly conservative and willing to swallow any compromise if they can join the SPD or the CDU at any government level. The Greens fully backed the war against Serbia, ignore workers’ rights and lead the way in hitting at Russia.

The newest party, the Alternative for Germany (AfD), is viciously opposed to immigrants, foreigners generally and Muslims in particular, but also same-gender marriages, abortion, workers’ rights and demilitarization. It is riddled with politicians leaning perilously close to openly fascist views. Some leaders try to cover up for them, at least until they achieve their goal, getting seats in the Bundestag at last and thus obtaining even more media presence than already granted them. Their posters? Two bathing beauties and the words: “Burkas? We prefer bikinis!” Or a very pregnant woman: “’New Germans? We make them ourselves!” We can have great expectations!

Then there is Die Linke, the Left Party. It now has 64 Bundestag seats (35 held by women) and hopes to surpass or at least repeat that number. It alone has consistently opposed all militarization, all arms shipments to conflict areas, all deployment of troops outside the country. Despite only sparse ties to union leaders above the regional level, it is most aggressive in fighting for workers’ rights, a higher minimum wage (12 euros, now 8.84), decent pensions and higher taxes on the wealthy.

But in Berlin and two other states where it is in a ruling coalition (it heads the one in Thuringia), and despite some achievements, often unreported, it has also been forced into “responsible government” compromises — to meet budgets or lure capital.

Some worried and disappointed voters see it as part of “the Establishment” and stay home on Election Day or even make their cross (no electronic voting in Germany) on the “truly oppositional” AfD line. Some Left leaders still hope for an SPD, Green and Linke coalition on a national level, but the failure of Schulz to gain in the polls seems to bar such a possibility, which would require earnest Linke compromises, even in its status as “the only Peace party.”

A large Linke poster quotes Sahra Wagenknecht, 48, co-chair of the Linke caucus in the Bundestag and the party’s main theoretician, who has another message: “Opposition to corporations and banks demands a strong backbone — and your support.”

All four “lesser parties” now get unusually similar poll results, daily changing their rank, mostly in the 8 to 9 percent range, almost always between 7 and 11 percent. The Greens are usually weakest. It is this race which provides the only real suspense, since all hope to win come in third, after the two main parties.

Whatever happens, the CDU, certain to come in first, must choose between FDP, SPD or Greens (but not yet the AfD and never the Linke!). Whichever, the CDU’s defense minister is continuing to build up the armed forces while the interior minister develops more stringent ways of detecting every step of every citizen, now including possible facial recognition cameras at railway stations. Especially after the sharply misleading accounts of violence at the G20 summit meeting in Hamburg in July, such measures aim at “terrorists and criminals on both right and left.”

Who gets to define these categories, and where all this can lead, may well be affected by any rightward drift on Sept. 24. How comforting it is to know that in democratic, civilized Germany, nasty elements could never ever gain or misuse power! If you don’t believe it, just look at the history books!