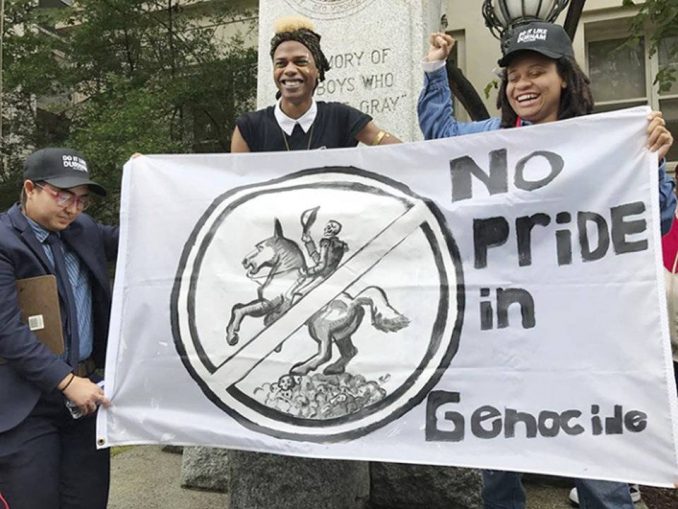 In Durham, N.C., at the toppled Confederate statue with LT Tran, A.A. Jones and Takiyah Thompson on Sept. 12.

Durham, N.C. — Some 200 people gathered at 9 a.m. at the Durham courthouse on a rainy Sept. 12 to support Workers World Party members and other activists who were facing charges for their actions during the toppling of a Confederate statue symbolizing white supremacy on Aug. 14. The group included people who had caravanned from around the country to be at the action.

After an hour-long rally, the nine activists emerged from the courthouse. Their cases had been continued to Nov. 14. Two other WWP activists face court dates on Oct. 11.

Wearing hats and T-shirts that read, “Do It Like Durham,” the crowd then marched militantly through the streets to say “no” to white supremacy. They declared a victory at the site of the Confederate statue, which crumpled when WWP member and North Carolina Central University student Takiyah Thompson, along with others, brought it down. Finally, the group marched to a nearby park, where they danced, sang, gave speeches and vowed to continue the fight. The uplifting action was held exactly a month after the people’s resistance to fascism and racism in Charlottesville, Va., and the murder of activist Heather Heyer there.

At the opening rally, the Rev. Curtis Gatewood argued, a day after the anniversary of 9/11, that the government talks about terrorism but not about the terrorism it wages on Black and Brown people. Gatewood recently inaugurated the Stop Killing Us campaign. “There is terrorism in Michigan, North Carolina, Virginia — a terrorist is sitting in the White House,” Gatewood declared.

Eva Panjwani, one of the rally’s emcees and a member of WWP, noted that a lot of what passes for law in this country is racist, and the work of social justice movements is to point out these unjust laws. “It’s never been just about the statues, but about white supremacy,” they stated.

Lamont Lilly, the other emcee and Workers World Party’s 2016 vice presidential candidate, asserted: “This is not the time to speak timidly — we must speak direct truth to power.” He cited the long years of oppression, activism and organizing in Durham and throughout the country, asking, “Who keeps us safe?” The crowd responded, “We keep us safe.”

Basma, of the Baltimore branch of Workers World Party, discussed how Durham is an antidote to any doubts people may feel about righteous struggle. Andrew Gil, of the Baltimore People’s Power Assembly, mentioned the imposing of imperialist U.S. statues around the world, and the toppling of a statue of Gen. Douglas MacArthur in 2013 in the Philippines.

Standing at the site of the Confederate statue, Takiyah Thompson said, “People have been asking me how I feel all day. I feel powerful, I feel great. I’m not losing a wink of sleep. I slept like a baby. I slept like a free person last night because we are all more free thanks to the action that we took on Aug. 14. And we know that struggle is not an event. It’s a lifetime commitment.”

By Thompson’s side, arrestee LT Tran paid tribute to Heather Heyer, the activist killed in Charlottesville on July 12: “We fight in her honor and in honor of freedom fighters over centuries. We do it because we love our people.”

Anthony Jones, of Take Em Down NOLA, discussed the struggle to remove Confederate statues in New Orleans. “White supremacy is a system that only works for the capitalists at the top,” Jones asserted.

At the energizing closing rally, activist-musician Toshi Reagon, who had traveled all the way from New York to be at the rally, performed a song with the refrain, “I’m going to get my baby out of jail.” Grace Nichols, of Southerners on New Ground, discussed their organization’s campaign to bail Black women out of jail. “In Durham,” Nichols stated, “the population is 50 percent white, but the jails are 50 percent Black. They’re criminalizing folks they don’t want to see.”