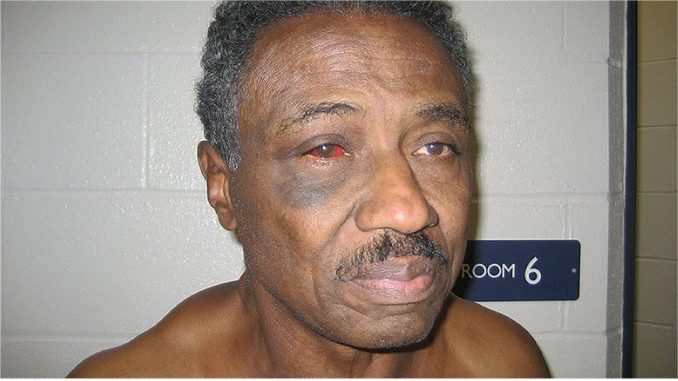 Herman Bell a week after the attack.

Herman Bell is 69 years old.  This former Black Panther has been incarcerated for over 40 years. In a stunning attack on Sept. 5, a group of six prison guards at Great Meadow Correctional Facility (Comstock), brutally beat Bell, leaving him seriously injured. One guard pounded his head onto the pavement, while others viciously punched and kicked Bell all over his body. Mace was sprayed directly into his eyes.

As a result, Bell has fractured ribs, visible in x-rays taken at the prison  infirmary.  His left eye is swollen and bruised and his vision impaired. There are multiple abrasions and lacerations all over his body.  He asked the prison doctor to photograph his hands and arms to show that he has no defensive wounds and didn’t offer any resistance.

As is often the case when guards beat prisoners, Bell has been falsely charged with “assault on staff.” After the beating, he was transferred to the Special Housing Unit (“the box”) at Five Points Correctional Facility. He is “locked down” 23 hours a day.

Bell’s spouse, Nancy Bell, visited him at Five Points Correctional Facility on Sept. 9 and described him as “chained and shackled behind glass and a screen, with a big black eye that was very runny and watery.”  She described him as being in “excruciating pain,” and is concerned that “he may not regain vision in his eye due to the extreme amount of Mace he sustained.” (Amsterdam News, Sept. 14)

For over 20 years, Bell had not been charged with any disciplinary violations. Before the assault, he had been scheduled to have a three-day visit with his spouse in a few days, the first in two and a half years.  Moreover, he was starting to prepare for his eighth parole board hearing, set for February 2018.

Now Bell has been charged with assault on a guard! If he is convicted, he faces a lengthy stay in the Special Housing Unit and the loss of privileges and “good time.” The possibility of parole could be squashed for years to come.

Bell’s supporters are asking that letters and cards expressing get-well wishes and solidarity be sent to him. This is to give him support and also show prison authorities that many people are paying attention to his health and well-being.

Send cards and letters to Herman Bell using this address:

It is suggested that white envelopes be used.

Additionally, Bell’s supporters are asking that letters be sent to Anthony Annucci, Commissioner of New York State Department of Corrections and Community Supervision, 1220 Washington Ave., Albany, NY 12226.  These letters should ask that Herman Bell be given medical attention at an outside hospital; that the officers responsible for the beating be fired; that the unwarranted charges against Bell be dropped; that Bell be transferred back to the general population at Great Meadow Correctional Facility where he had been on the Honor Block; and that his family visits be reinstated.

Bell’s beating is one of many that occur on a daily basis in the oppressive U.S. prison system, where 2.4 million people are incarcerated under brutal conditions, a disproportionate number African Americans and Latinx.  Prison guards are allowed to terrorize those inside the jails and then escape culpability for the violence they mete out. This brutality must be opposed, and those responsible held accountable.

Much of the information for this article came from freehermanbell.org.