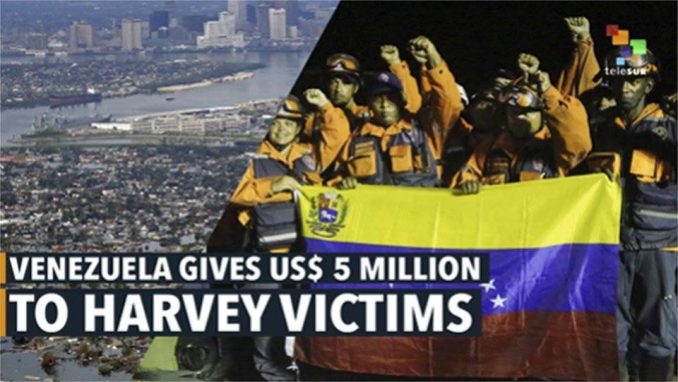 The Bolivarian government of Venezuela has made free gasoline available to all Hurricane Harvey rescue workers, firefighters and other first responders in Texas and Louisiana. Foreign Minister Jorge Arreaza announced on Twitter on Sept. 2 that the government was acting in solidarity with suffering area families. The gasoline is available at Citgo stations, through Citgo Holding Inc., a subsidiary of the country’s state-owned oil company, Petróleos de Venezuela. The announcement came a day after Citgo administrators made a U.S. $5 million donation to ­Houston’s Harvey Relief Fund. (teleSUR)

Open Letter to the People and Government of the U.S. from the People of Venezuela

We, the People of Venezuela, want to address the People of the United States of America. You must know that on August 11, 2017, President Donald Trump threatened the Bolivarian Republic of Venezuela with direct military intervention. This dangerous threat was rejected by all nations and by the People of the United States. Nevertheless, two weeks later, President Trump imposed severe and unfair sanctions on us, publicly admitting his intention was to economically isolate Venezuela. It is the same strategy — recognized by the U.S. Government — that was implemented to overthrow the democratic government of Chile in 1973, paving the way for the ruthless dictatorship of Augusto Pinochet.

These threats and unilateral decisions will affect our economy and our means to obtain resources for food, health care and production, seriously impairing our citizens’ everyday life. President Trump seeks to manufacture a political crisis in our country by forcing President Nicolás Maduro out of office, even though he was democratically elected in 2013.

Furthermore, these actions also affect ordinary U.S. citizens, who could face the possibility of a hike in gasoline, while thousands of workers risk losing their hard-earned savings as retirement funds are affected by the ban on Venezuelan bonds.

This behavior is inconsistent with Donald Trump’s campaign slogan, “Make America great again.” Rather, it creates new problems, both inside and outside the United States, making life harder both for Venezuelans and millions of U.S. citizens, while at the same time, it generates global rejection and resentment toward the U.S. government, and indeed towards its people, who have nothing to do with these warmongering actions.

As was the case in Iraq, we might be on the verge of an unfair and baseless military intervention, where oil is paramount. Yet nothing can justify that young Americans are driven into another military conflict, much less if it entails confronting a friendly and peaceful country such as Venezuela.

Venezuela is neither an enemy of the United States nor does it represent a threat to its security. We admire its history, culture and scientific achievements. It is, therefore, imperative to cease this irrational policy of aggression and instead promote political understanding, so this long tradition of friendship between the two countries can be made to flourish.

President Maduro has tried to reach out to President Trump several times, so as to facilitate communication and generate solutions based upon International Law and mutual respect. Regrettably, thus far, the U.S. Government has ignored and disregarded all dialogue initiatives proposed by the Venezuelan Government.

The People of the United States are a people of peace, and we believe you should lead efforts seeking to neutralize the jingoist intentions of your government. That is why we reach out to you, in fraternity and sincerity, to urge all Americans of good will, to join us in working together for the defense of our peoples’ freedoms, our children’s well-being, towards cooperation and peace for our region. It is a time for dialogue and understanding. Let us not miss this opportunity and in the words of John Lennon: Let’s give peace a chance.