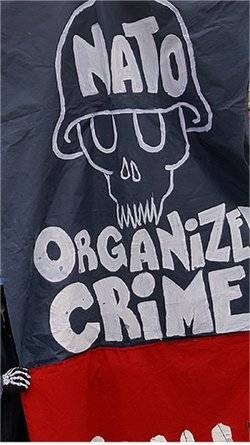 Stockholm — More than 350 people gathered in central Stockholm on Sept. 9 to protest U.S. and other NATO participation in the Aurora military exercises in Sweden. Demonstrators saw Sweden’s participation as proof of a gradual movement toward membership in NATO.

Sweden has been a neutral country in all European wars since the Napoleonic wars 200 years ago.

The right-wing parties in opposition have openly called for Sweden to join NATO. Because of strong popular support for non-alignment, the left-of-center ruling coalition has refrained from openly espousing such a major change.

Sweden has become more entangled with U.S. foreign policy in recent years. U.S. components are used in the JAS fighter jet produced by SAAB, and Swedish arms are used, contrary to Swedish law, in conflicts in the Middle East.

Anti-imperialists in Sweden have protested against the small contingent of Swedish troops participating in the so-called “Partnership for Peace” operation in Afghanistan, as well as against Swedish reconnaissance aid during the bombing of Libya and the training of separatist Peshmerga (Kurdish) troops in Iraq. Under extreme U.S. pressure, even non-NATO countries have been forced to contribute to U.S.-coalition actions under the guise of “fighting terrorism.”

NATO policy is based on a nuclear umbrella “defense guarantee” that few in Sweden wish to be part of. Recently 121 nations in the U.N. General Assembly, including Sweden, adopted a convention calling for the total prohibition of nuclear weapons. The U.S. government then sent a threatening letter to the Swedish defense minister, warning that Swedish ratification of the convention would endanger all future military cooperation and assistance to Sweden.

This blatant interference in a Swedish decision has infuriated opponents of the ongoing exercises and of any moves toward further NATO involvement. A broad national demonstration is planned in the city of Gothenburg on the Sept. 16 weekend.

In a major action by the German peace movement, some 5,000 people ringed the perimeter of Ramstein Air Force Base in western Germany on Sept. 9 to protest NATO aggression and the U.S. use of drones to kill people. Ramstein is the center for U.S. drone operations worldwide — operations responsible for killing hundreds of civilians as they allegedly target “terrorist” leaders.

One major global defense contractor involved in drone-related development for the U.S. is Saab Defense and Security, whose U.S. headquarters is in Syracuse, N.Y. It recently was co-awarded a $9.6 million contract from the U.S. military’s Defense Advanced Research Projects Agency (DARPA). (syracuse.com, August 30)

These European protests may present a welcome obstacle to U.S. efforts to increase European involvement in its global military operations.