Pokanoket Demand Return of Land from Brown U.

Members of the Pokanoket Nation and their allies set up an encampment in the Mount Hope area of Bristol, R.I. (Potumtuk), on Aug. 20, to draw attention to their quest to get Brown University to return unceded ancestral land there. This is the first time in 343 years that Indigenous people have governed and inhabited that land.

Potumtuk is the spiritual center of the Pokanoket Nation and was also the site where Po Metacom, leader of a regional revolt against the colonizers in the 1670s, was beheaded. English settlers then grabbed the land.  In more recent years, Brown University’s Haffenreffer Museum has been located on part of Potumtuk.

The Pokanoket and some of their allies marched on Sept. 5 outside Brown’s student convocation ceremony, marking the beginning of the school year. They did this to draw attention to their struggle and provide information to students. The Pokanoket and Brown University are currently in discussions, as the encampment continues.  For more information, see tinyurl.com/yapnlfa7 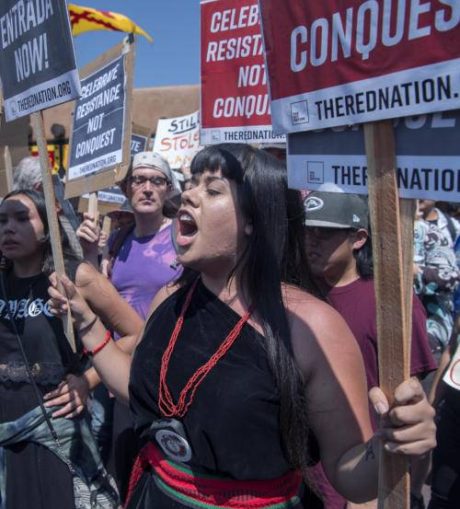 Eight protesters were arrested in Santa Fe, N.M., on Sept. 8, as about 200 people rallied to abolish the Entrada, an annual local racist celebration of the Spanish seizure of the land from the Pueblo people for a second time.  It glorifies the conquistadors and features a re-enactment of the reconquest in the early 1690s.

The largely Indigenous #AbolishTheEntrada coalition called on officials in advance to renounce the anti-Indigenous racism that is at the heart of the Entrada. The city’s response was to use a  sneak tactic, making the starting time of the Entrada re-enactment earlier, while ensuring that a large police presence was there to suppress the right to protest.

The cops insisted on corralling the peaceful Indigenous protesters behind barricades in an out-of-the-way, “free speech zone.”  Eyewitnesses said that police snipers were on rooftops, and that every effort was made to intimidate the protesters.

Some of those arrested were reportedly paraded through the streets of Santa Fe like prisoners of war. The abuse of the protesters and the arrestees brought to the forefront the racist violence that Indigenous people face daily. Protesters also heard white racists yelling at them to “go back where you came from” and “go back to the reservation.”