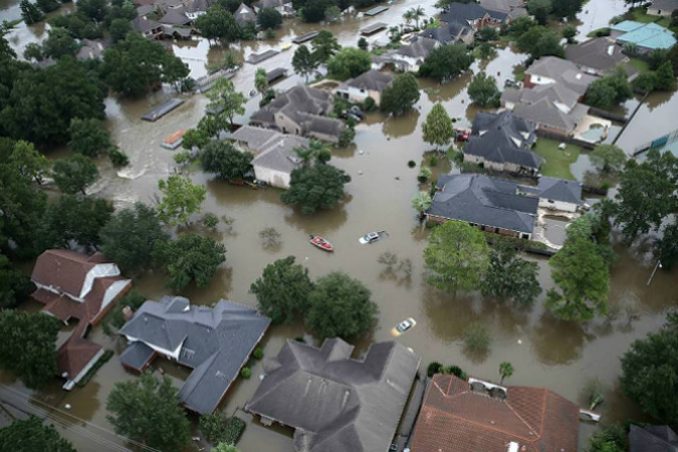 In “Capital,” Karl Marx described capitalism as a system that is designed entirely around the exploitation of labor — but its true character is hidden.
Unlike previous social systems like slavery and serfdom, where the use and abuse of slaves or serfs to produce wealth was evident to everyone, capitalism’s exploitation is hidden underneath a bunch of ideas that workers and bosses are equal, independent agents, and part of a democratic system that guarantees complete freedom for all.

For capitalism to survive as a system of exploitation, it needs to constantly hide the true character of all phenomena. No matter what’s at stake, what’s important, what any given struggle is really about — the dominant, ruling-class interpretation of events has the effect of obscuring reality.

There is a very public struggle for truth over whether Hurricane Harvey was preventable or unprecedented. In this struggle the opposing sides are, on the one hand, scientists and environmental activists who tried to warn the public about both global warming and how Houston’s sprawl prevented the ground’s absorption of flood water. On the other hand are climate-change deniers and politicians who deliberately ignored the warnings of scientists for reasons of expediency, improper planning or greed.

This debate is crucial. Climate change is affecting millions. The experience of the Gulf Coast is magnified tenfold in India, Nepal and Bangladesh, whose populations are right now suffering massively — 1,200 killed and tens of thousands left homeless — under another record-breaking monsoon made worse by climate change.

But even this struggle over how disasters happen, with excellent points from the scientific climate-change crowd (the “500-year flood” has happened three times in the last three years), obscures the true nature of what is unfolding in Houston, the Gulf Coast and South Asia: a massive societal breakdown because of a global social system that prioritizes the right to exploit people for profit over human needs.

Largely left out of the discussion is that the emission of greenhouse gases is caused by capitalism. Also ignored is the crime that, unlike the wealthy 1%, the vast majority of this society are left to their own devices in extreme-weather crises caused by the system.

This becomes more strikingly apparent when you compare the massive preparations made by the socialist Cuban government for and with its people whenever a hurricane hits. The loss of life there is overwhelmingly less than in capitalist countries.

This fact is readily admitted by rescue and humanitarian agencies like the Red Cross, the Red Crescent, the U.N., Oxfam, etc. A person is 15 times more likely to be killed by a hurricane in the U.S. as in Cuba, admitted the Center for International Policy in 2013. But they never attribute these amazing results to Cuba’s social system.

The first thing that sets Cuba apart from capitalist countries is that the response to hurricanes take place well before they hit. Every sector of society is involved, and annual trainings start with people when they are young.

With regular annual training exercises, emergency stockpiles, round-the-clock alerts in the media and evacuation preparations beginning 48 hours before landfall, the dominant mode of Cuba’s handling of hurricanes is preventive. The dominant way capitalist regimes respond to hurricanes is reactive.

Another outstanding approach in Cuba is called “community risk mapping.” A 2004 study by Oxfam reported how this is carried out by community leaders. A member of the Cuban Women’s Federation explained: “If a hurricane hits, I know that inside one multi-family unit is an old woman in a wheelchair, who is going to need help to leave. I have 11 single mothers on second and third floors of apartment buildings with children under two who will need more support to evacuate and special needs in the shelters. I have two pregnant women, one in that block and one on this one, who will need special attention.”

Some argue that having to contend with more frequent hurricanes is what makes Cuba’s hurricane defense superior — not its social system.

But Cuba’s approach to other health and human welfare issues is also superior. Take the Zika virus, a phenomenon that was devastating to the people of Haiti, Puerto Rico, Brazil, Colombia and other countries, as well as in south Florida.

True, Cuba’s response to Zika was helped by its years of fighting the mosquito-borne dengue and chikungunya diseases. But that doesn’t explain why its Zika infection and death rate have been so much lower than in the capitalist countries around it — and, like its hurricane system, universally praised by health experts.

Carlos Espinal Tejeda, a tropical disease specialist at the University of Miami, told the health publication STAT: “In Miami and in places in Latin America, they waited until they had cases and then mobilized. … In Cuba, it’s the opposite. When they see a virus about to arrive, they mobilize.”

And of course Cuba does all of this under the harsh conditions of the U.S. blockade, which prevents its planners and doctors from buying supplies on the world market that are available to capitalist countries.

On Sept. 1, HuffPost published the aptly named article “Houston, We Have a Problem.” Referring to the extreme weather in both the U.S. Gulf Coast and South Asia, the author issued a clarion call for humanity to address the scourge of climate change.

“By continuing with business as usual, we exploit and use oil and gas at record levels, despite the warnings of scientists,” writes the author. “We must not live in a fool’s paradise thinking that we can continue on our current course and that everything will be okay.”

This is true. But a social system like capitalism is focused on making money now. It doesn’t have the ability or the motivation to think ahead and avoid problems — unless those problems affect the bourgeoisie’s ability to make a profit.

Texas politician Bill King wrote an op-ed piece in the Aug. 28 New York Times titled “Houston’s Mayor Was Right to Not Evacuate.” He stated, “It is logistically impossible to evacuate millions of people from low-lying areas ahead of a major hurricane.”

Compare that with the following: “In September 2004, Cuba endured Ivan, the fifth-largest hurricane ever to hit the Caribbean, with sustained winds of 124 miles per hour. Cuba evacuated almost 2 million people — more than 15 percent of the total population. One hundred thousand people were evacuated within the first three hours. An incredible 78 percent of those evacuated were welcomed into other people’s homes. Children at boarding schools were moved. Animals and birds were moved. No one was killed.” (Fred Goldstein, Workers World, Jan. 13, 2005, “Deaths not just act of nature — Socialist organization & planning can save lives.” The article, available online at workers.org, gives a detailed explanation of how Cuba is organized on every level to deal with such problems.)

What appears to be possible and true depends on a society’s social system.
Yes, Houston, we have a problem. The problem is capitalism. Capitalism is hostile to people’s needs and ability to keep ourselves and loved ones healthy.

What has caused so much suffering in the Gulf Coast also causes layoffs, racism, poverty and war. We have to overthrow capitalism and replace it with socialism.