To help the millions of Hurricane Harvey survivors on the Texas Gulf Coast, consider donating to the Texas Workers Relief Fund, a 501(c)(3) charity. The Texas AFL-CIO set up TWRF years ago to provide solidarity to union members dealing with environmental and other disasters. After vast wildfires in 2016, it was opened to the public for donations. Calls to donate to TWRF are coming from many national unions, including the Teamsters, the United Auto Workers, the International Longshoremen’s Association, the National Association of Letter Carriers and the American Federation of Teachers. Visit texasaflcio.org/donate/.

The Registered Nurse Response Network, a national group of volunteer nurses affiliated with National Nurses United, deployed its first delegation to Houston on Aug. 31. Unionized carpenters, electricians, plumbers and others with trade skills in the area and from across the country are also volunteering their time and know-how.

AFL-CIO Secretary-Treasurer Liz Shuler announced major support on Sept. 1 from the national organization to help survivors and rebuild after the floodwaters subside. In addition to an immediate donation of $100,000 to TWRF, the AFL-CIO pledged to raise $5 million in cash aid. Its Housing Investment Trust plans to invest $500 million over five years in affordable housing in the area. (aflcio.org, Sept. 1) 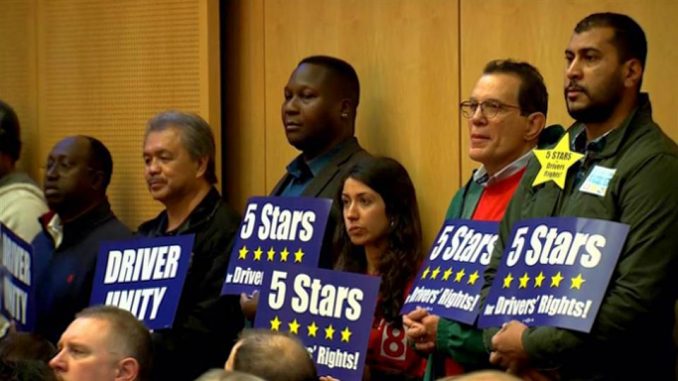 For-hire drivers in Seattle are battling for their rights, trying to improve their working conditions for the benefit of themselves and their families, while Wall Street-backed Uber and Lyft companies put up roadblocks.

In 2015, Seattle drivers formed the ABDA (App-Based Drivers Association) and helped pass a law that started the engine on unionizing with Teamsters Local 117. Currently, this multinational, multigendered workforce gains no benefit from Seattle’s $15 per hour minimum wage, nor from paid sick day or safety ordinances.

But Uber management and its cronies in the National Right to Work Defense Fund won an injunction against the law. They argued it would violate the National Labor Relations Act as drivers are “independent contractors” who have no rights under the NLRA. A district court judge ruled in favor of the union by dropping the injunction on Aug. 24. But after Uber appealed, the Ninth Circuit Court of Appeals countered on Aug. 30 with a second injunction supporting the bosses. (The Stranger, August 2017)

Despite the second ruling, a Local 117 statement was optimistic: “For-hire drivers should have the same right to self-determination shared by millions of working people across the country.”

Implementation of the Seattle minimum wage law would set a far-reaching precedent for thousands of workers currently misclassified as “independent contractors,” such as truck drivers at Los Angeles ports and janitors in the Twin Cities hired by contractors to clean big box stores. ¡La lucha continúa!

One of the most racist arms of the state, U.S. Immigration and Customs Enforcement, is wreaking havoc in people’s lives even when they simply show up to work. That happened on May 3, when two immigrant workers from Mexico, Hugo Mejía and Rodrigo Núñez, were assigned construction jobs at an Air Force base in Fairfield, Calif. Base security demanded to see their papers. When the workers didn’t have valid Social Security numbers, security called ICE, which detained them. Unfortunately, Núñez, a member of the Carpenter’s union (UBC), was deported in early August, leaving behind U.S.-born children.

In early June, the Painters union (IUPAT) launched a national campaign to defend Mejía, who has been a member of Local 83 of District Council 16 in the Bay Area for four years. The union and community allies have held national call-in days to the ICE regional director and actions in front of the San Francisco field office. Other IUPAT locals took up the struggle. In Providence, R.I., Local 195 teamed up with Jobs with Justice and the worker center Fuerza Laboral/Labor Power to hold weekly demonstrations in front of the federal building.

In a statement, the IUPAT president wrote, “We will not allow the act of showing up to work to be criminalized.” A member of the union’s Strategic Organizing Division stated, “If we want to be any type of a union, … we have to organize immigrant workers.” (Labor Notes, Aug. 23)

Join the struggle to free Hugo! Sign an IUPAT petition on freehugo.com. And call ICE Regional Director David Jennings at 415-844-5503.