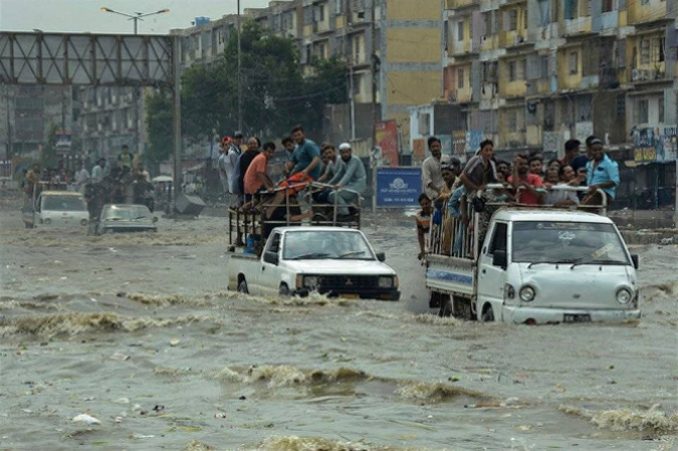 At least 40 million people have been affected by two months of severe flooding in India, Nepal and Bangladesh.

The wet monsoons, which hit South and Southeast Asia between April and September, normally bring some flooding.

This year’s monsoon has brought devastation. At least 1,200 people died from drowning and mudslides in India, Pakistan, Nepal and Bangladesh; two-thirds of Bangladesh is underwater. (Weather Channel, Aug. 29)

Some 18,000 schools across the entire area have been damaged, which means that approximately 1.8 million children are indefinitely unable to attend school.

With the devastation in Texas and Louisiana — the result of a criminal conspiracy among the politicians, the oil billionaires and the big banks — the Asian catastrophe 8,000 miles away has barely been covered in the U.S. press. While the weather patterns are different, the root cause of both catastrophes — global warming — is the same.

According to an Aug. 24 U.N. statement, 41 million people have been severely affected. However, very heavy rains hit Mumbai, India’s financial center, and Karachi, Pakistan’s capital, after Aug. 24, so the U.N. estimate is probably too low.

Mumbai got a month’s worth of rain in a single day. The wealthy entrepreneurs and capitalists who live in its fancy apartment buildings had their commute disrupted.

Poor families — about 60 percent of Mumbai’s population — live in huts and shacks behind the big buildings, and many lost their shelter. The estimated 150,000 to 300,000 people who are homeless also went hungry; they couldn’t cook in the rain.

Thousands of small Indian villages were underwater in several states, including Assam, Bihar, Odisha, Maharashtra, Uttar Pradesh and West Bengal. Relief efforts in India appear to have been directed to the relatively well-off sectors with access to the internet and cell phones. The homeless and the poor don’t have access.

According to the U.N., the flooding in Nepal, where 150 people have died and 90,000 homes destroyed, is the worst the country has seen in a decade.

Besides flood damage, Bangladesh is facing another major immediate problem. The U.N. stated Sept. 4 that 87,000 mostly Rohingya refugees had arrived in Bangladesh from Myanmar since Aug. 25, with around 20,000 more massed on the border and waiting to enter. Some 400,000 refugees are already living in Bangladesh, which is having trouble even providing minimal food aid for them since its farm-based economy has been severely damaged this past year.

“Heavy rain in the Asia monsoon is normal,” Jonathan Erdman, senior meteorologist at weather.com, said, “[B]ut, this was above the norm over a large area of Bangladesh, east India.” (Aug. 30)

Due to global warming, the sea level around Bangladesh has risen, and the snow pack in the Himalayas has melted earlier and quicker. What this means is that the tremendous amount of water the monsoon has dumped in the Ganges-Brahmaputra Delta is going to drain slowly. The devastation will take a long time to clear.

The weather patterns of hurricanes in the U.S. Gulf Coast and monsoons in South Asia both existed before global warming.

What is new is their intensification. It is becoming clearer and clearer that the carbon pumped into the atmosphere by the profit-driven oil and gas companies is a danger to the whole world.