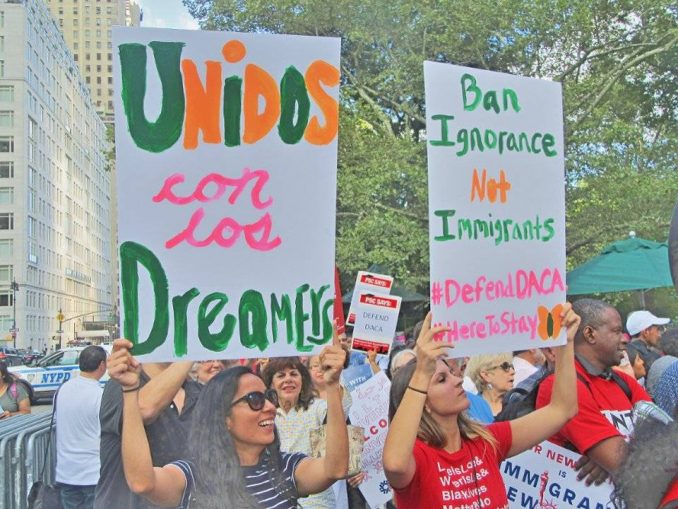 The Bigot in Chief is supposed to announce, on Sept. 5, his decision on whether to eliminate the ruling on the Deferred Action for Childhood Arrivals program. DACA was put in place by President Barack Obama to defend — at least temporarily — the rights of children to stay here who were born elsewhere but grew up in the United States.

There is no doubt that anyone who is not brainwashed by xenophobic propaganda or part of the racist clique with all too much power in this country defends the right of young immigrants — the “dreamers” — to remain in the United States should they wish to do so.

Since these children, now grown-up workers, really have no home country to go to, since their relatives, friends, schools, jobs and roots are all here, any decision to deport them against their will is not only unjust, it is cruel and unusual punishment for people who have committed no crime.

Most of their parents came here during the 1990s and early 2000s.  Many of them were driven off their farms and out of their homelands when “free trade” agreements opened up their countries to U.S. agribusiness and other monopolies. They are also innocent of any crimes. They were part of the workforce that built the relative boom economy during those years in the U.S.

The dreamers’ right to remain here is supported by two-thirds of the population, according to polls. It is supported by labor unions that have immigrants among their members and by any unions with progressive leadership. That was shown by a pro-DACA demonstration in New York City on Aug. 30, with participation from UNITE HERE Local 100, Service Employees Union 32BJ and the Professional Staff Congress/City University of New York.

DACA is even supported by some big businesses, including agribusiness, which need their labor and strive to keep paying lower wages to a workforce that is less sure of its rights and vulnerable to the bosses’ threats of calling in Immigration and Customs Enforcement authorities.

But the working class should avoid being disoriented by the support dreamers apparently have from a section of the ruling class. Much more important is the need for working people of all nationalities in the United States to build solidarity with workers across all borders and across all seas.

Only by building such international working-class solidarity can workers inside the U.S. ever hope to defeat our imperialist rulers — or even win higher wages and benefits.

The first step, on Sept. 4, is to demand that the chief bigot, who built his presidential campaign by slandering Mexican workers, keep the DACA program intact. If he doesn’t do this, and instead maintains his ties to the most reactionary Republicans and the ultra-right super-bigots, he should be met with even greater protests by the masses of people here.