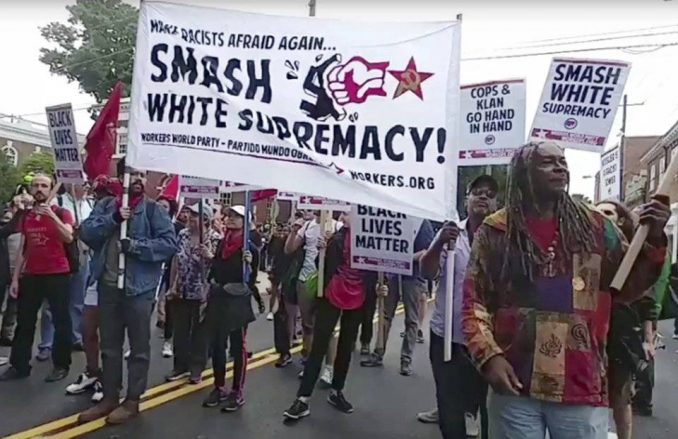 The world is witnessing righteous resistance against fascist and white supremacist mobilizations across the United States: in Charlottesville, Va.; Berkeley, Calif.; Durham, N.C.; Boston and many other cities.

As the left unites to fight back against emboldened racist and fascist elements, the state is focusing its energy on repressing the movement against white supremacy. An emerging tactic that has been employed in Charlottesville, Durham and New York City is the use of antiquated “anti-masking” laws to criminalize left forces at protests.

Anti-masking laws were created during the Civil Rights era to prevent the Ku Klux Klan from donning their hoods in order to terrorize communities in anonymity. These laws, which were rarely enforced during the Civil Rights era, did nothing to prevent the KKK and other white supremacists from concealing their identities and unleashing violence across the U.S.

Today, the state has leveraged these laws to target and criminalize protesters, while continuing to allow white supremacists to hide their identities and torment whole communities.

On Aug. 12, members and friends of Workers World Party stood side by side with masked and unmasked leftists in Charlottesville as we confronted armed white supremacists. In preparation for our mobilization, we briefed everyone on the anti-masking law in Virginia, which has made masking a felony offense since 1950. We warned that during an anti-Klan mobilization in Charlottesville on July 8, four anti-racist activists were charged with a felony for masking after being assaulted by the police with noxious tear gas and pepper spray.

We also carried items to cover ourselves in the event of similar state repression on Aug 12. Many of us utilized masks that day after being tear gassed by white supremacists, police and army reserves.

None of the white supremacists were arrested for donning masks or hoods while terrorizing Charlottesville.

In North Carolina, where masking has been a criminal offense since 1953, the state has targeted protesters at peaceful demonstrations by identifying people who were supposedly masked and arresting them on site and through video surveillance.