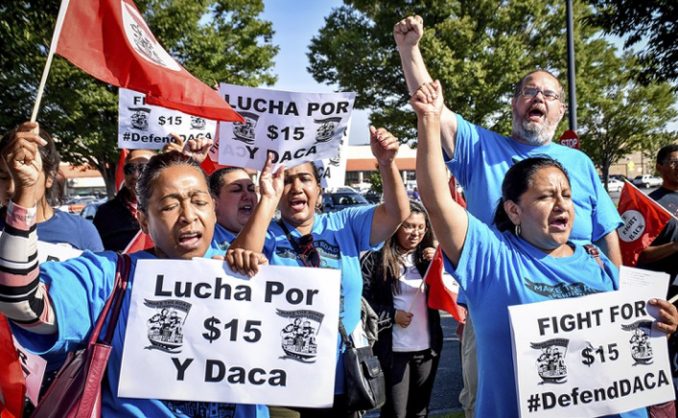 “Fight for $15” and “Unionize” resonated in 300 cities around the U.S. as workers and allies chanted and marched on Sept. 4, Labor Day. Thousands of low-paid fast food and other workers, many of them African American, Latinx and immigrants, demanded a $15 hourly minimum wage so they could better care for their families. McDonald’s workers struck in several cities, joined by union members and other allies; they called for not only better pay and working conditions, but the right to organize unions to defend their rights.

In Philadelphia, Fight for $15 PA, Service Employees Union 32BJ and other unions representing fast food, home care, airport and retail workers and immigrants, joined by community activists, rallied and marched around a South Philadelphia McDonald’s restaurant. They demanded a raise in the minimum wage to $15 an hour, up from Pennsylvania’s $7.25 hourly wage. A contingent of immigrant workers energized the rally with chants of “Lucha por $15 y DACA” (“Struggle for $15 and DACA”); their signs had the same slogan. 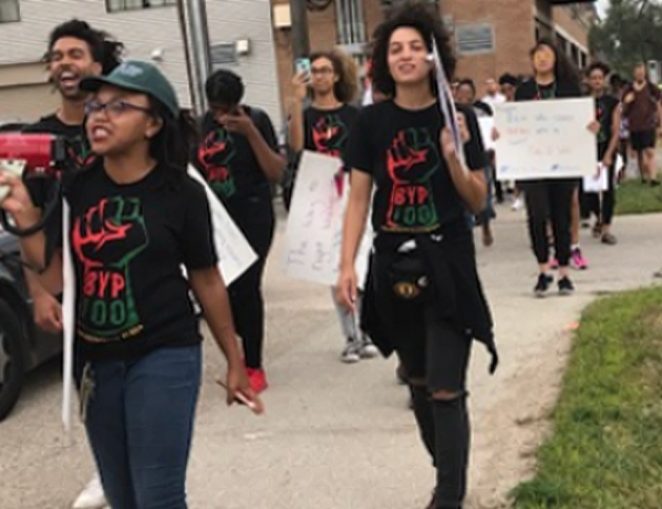 A Chicago South Side rally organized by BYP 100 on this Labor Day honored the too-often-overlooked contributions of Black women and femmes to the struggle for economic and social justice. The demonstrators then marched to Oak Woods Cemetery and the burial site of famed civil rights fighter Ida B. Wells — which is marked by only a small nondescript gravestone — and demanded that a properly respectful monument to Ms. Wells replace the insulting federal monument to pro-slavery soldiers that currently mars the cemetery.

In Buffalo, N.Y., Buffalo Democratic Socialists of America, Buffalo Roja y Negra, Black Lives Matter and Workers World Party-Buffalo joined with Food and Commercial Workers/ChangeWalmart.org on a picket at McDonald’s in solidarity with low-wage workers fighting for what’s theirs — the right to $15/hour and a union.  Together they marched to take their history-changing place as one of the leading contingents in the Labor Day Parade held by the Buffalo Central Labor Council.