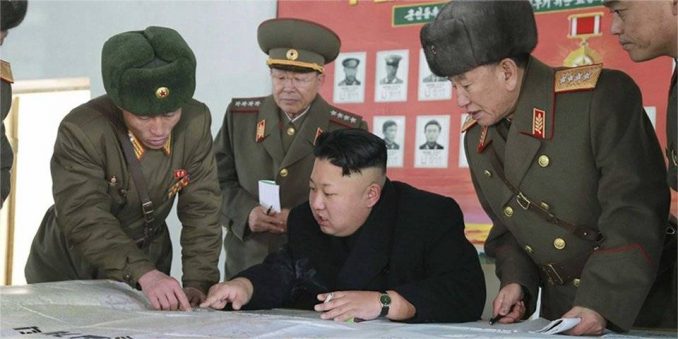 The news media, taking their cue from the political and military establishment of the U.S., are full of alarm, asking, “What do these Koreans want? Why on earth are they testing bigger and bigger nuclear bombs? They must be mad!”

The answer to why the Democratic People’s Republic of Korea is developing a nuclear defense is not hard to find. In fact, the answer is all around us – throughout the world, in the form of U.S. missile silos, warplanes, warships and submarines.

The U.S. at present maintains a nuclear arsenal of almost 7,000 warheads. A “nuclear modernization program,” initiated under the Obama administration, is continuing under Trump. The Arms Control Association estimates that the total cost of this program over the next 30 years will come to “between $1.25 trillion and $1.46 trillion.”

Mutually Assured Destruction – MAD – is the actual name of the military doctrine that has guided U.S. nuclear weapons development since at least 1962. In fact, U.S. military planners credit the MAD doctrine with preventing a nuclear exchange between the U.S. and the Soviet Union.

Let’s not forget how the nuclear arms race began. The U.S. started it when, as the world’s only nuclear power, it dropped atomic bombs on two Japanese cities at the very end of World War II, killing hundreds of thousands of civilians. This included tens of thousands of Koreans who had been forced to work there by the Japanese colonial rulers of Korea at that time.

By 1946, the U.S. had stockpiled many more of these fearsome weapons and announced a new war, the Cold War, against the Soviet Union, its former ally in the fight against Hitler’s armies. The implication was that the U.S. could use its nuclear arsenal to impose its will on the Soviet Union. But by 1949, the USSR successfully tested its first atomic bomb. The nuclear arms race was on.

The U.S. claimed it had to build thousands of such weapons to prevent a nuclear exchange with the Soviet Union. Even though the USSR ceased to exist in 1991, the U.S. continued to stockpile nukes, and is now expanding that deadly arsenal.

Today all the voices of U.S. imperialism – from the political leaders to the generals to the commercial media – are saying that the leaders of the DPRK  must be “mad” because they have successfully tested and built nuclear weapons and the missiles to deliver them.

But it is MAD, not “madness,” that drives the DPRK’s efforts to prevent a war by maintaining a powerful defense.

After all, if the U.S. military, with all its power enforced by ships, planes and bases around the world, can still be guided by the “mutually assured destruction” doctrine, why is it “mad” for a much smaller country to seek nuclear weapons in self-defense?

The threat the DPRK faces from the U.S. is not imagined or delusional. The country was invaded by 5 million U.S. troops from 1950 to 1953 in a horrendous war. For 64 years now, the U.S. has refused to sit down with the DPRK and sign a peace treaty formally ending that war. This allows the U.S. to continue its military occupation of the south, despite the opposition of the people there.

The U.S. has 38 military bases in south Korea. Every year, the Pentagon conducts military “exercises” in Korea simulating another war and invasion of the north. Just days before the installation of the current south Korean government, the U.S. rushed to install a THAAD missile base in the south, against popular opposition and the incoming president. The U.S. calls THAAD a “missile defense” system, but in fact it is offensive, and would facilitate an attack against the DPRK.

The DPRK knows war all too well. It understands the real need to defend itself against another invasion by the U.S.

Separated by two great oceans from any would-be invader, the U.S. has been through two world wars relatively untouched by comparison to Europe, Asia and North Africa. One would think this should ensure a thriving and comfortable life for the people of this country. Think again.

Even as the U.S. government earmarks over a trillion dollars to upgrading its nuclear arsenal, infrastructure here is crumbling. Global warming is bringing ever-more destructive storms, yet there is no planning to save lives on the tremendous scale now needed. Bridges, trains, subways, levees and dams are in terrible shape. Where is the $1.46 trillion plan to rebuild the infrastructure – and provide work at the same time for the tens of millions who can’t find living-wage jobs?

U.S. governments – under Republicans and Democrats – have been so wedded to maintaining economic and military domination over the world that they have scuttled any efforts to make major improvements to the infrastructure. This deterioration is only accelerating under Trump, who wants to cut taxes for the rich while throwing billions more to the Pentagon, at the expense of everything else.

Behind all this MADness is the insatiable appetite of imperialism, the last stage of capitalism, in which the system becomes dependent on super-profits sucked out of the world’s people, like a vampire on steroids. Millionaires cannot be content with what they have – they must become billionaires or sink under the fierce competition that continues even in monopoly capitalism.

Why do the U.S. rulers hate the DPRK so much? Not because it is a threat to the people here, but because it is socialist, not capitalist. The DPRK refuses to subject its people to exploitation by U.S. transnational corporations and banks. To the imperialists, that’s enough motivation to risk a horrible war.

The workers and oppressed peoples of the U.S. have nothing to gain, and everything to lose, from this Pentagon MADness.