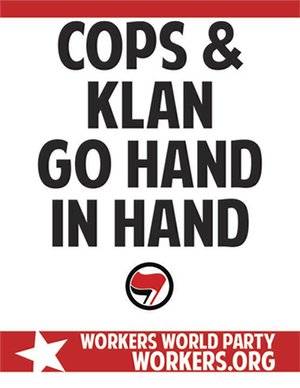 Followers of Trump had planned an Aug. 13 “anti- communist” rally in downtown Seattle. This was to be a “Patriot Prayer” rally, instigated by some of the same groups that had previously organized racist violence in Portland, Ore. A coalition, initiated by the General Defense Committee of the Industrial Workers of the World, was pulled together to confront the racists at city center.

The Charlottesville, Va., action, which exposed neo-Nazi and Klan-type violence, happened Aug. 12, the day before the expected Seattle rally. By the time the coalition marched out of a nearby park and against the racists on Aug. 13, over 1,000 people faced down a fascist gathering of some 50 to 75 people. Some chanted, “We Remember Charlottesville! We stand with Heather!”

The solidarity march was met by a huge force of Seattle cops, with extra cops brought in from the suburbs. Before the anti-racists could reach the racist rally at Westlake Center, the cops blocked them. That confirmed another slogan we’ve often chanted: “The cops and Klan work hand in hand.” Demonstrators were beaten, pepper-sprayed and injured by blue shirts in riot gear. So much for the liberal Seattle government.

But at least 200 people managed to get past the cops and encircle and drown out the white separatist rally. Two Black men liberated the stage from the racists and led a Black Lives Matter chant for